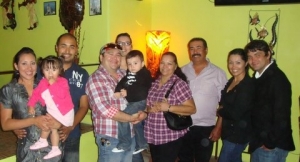 Photos and story by Susan A Mahalick

May 17, 2015 (Baja, Mexico)--Established June 13th, 2009 and owned by the Santos family, this is the place to hang out, be seen and meet new people all wrapped up with excellent food, service and views of the volcanic rocks being shaped by the waves of the Pacific Ocean. 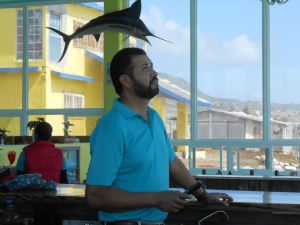 Located off the toll road or cuota at the Lechera exit is a three-story orange building which demarcates the neighborhood which contains Splash, a two story aqua building at Km 52.5. The old location is on the same property but only one story. You can also get there on the free road and the orange building is still the best landmark. Valet parking on Friday, Saturday and Sunday. 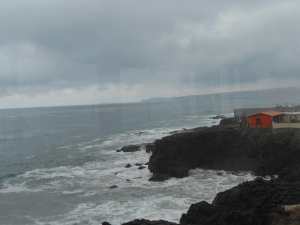 Yesterday was the grand opening of the new space built by Nicolas of two story splendor, framing the stunning scenery and spilling plenty of light on everyone and everything inside, even on a rainy day in spring. The floors are etched with motifs of dolphins, a compass and whatever else was fancied at the moment of design. About a thousand people showed up to see and be seen the first weekend. Nicolas Santos had forty two people working the first day and valet parking. His brother, JC works the bar along with Tony and at least one other bartender during busy times. 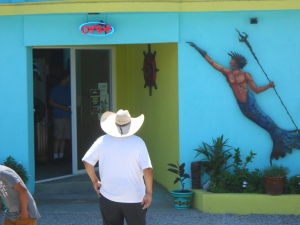 The brother, Agapo, is the chef who creates fresh and tasty dishes comprised mostly of fish, such as a shrimp burrito that covers the plate. A large flour tortilla is the setting for grilled or breaded and deep fried shrimp, covered with shredded cabbage and chopped tomatoes, then drizzled with a cream sauce. Mounded high, only salsa needs to be added if you wish or hot sauce. This delight along with a mug of frosty Mexican beer comes to the low price of about $7 with tip and tax. A popular hang out for locals and tourists alike, Splash keeps growing in popularity. 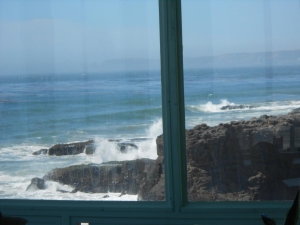 The second floor contains a small dance floor, a second bar, and a stage for people like Ross to play favorites for everyone to enjoy. A musician friend tells me the acoustics up there are pretty good. Sammy, another brother runs the bar upstairs and is popular just like his brother, Nicolas. A fourth brother JC, assists with the bar downstairs, along with Tony. Marco, a waiter that has been with Splash since the beginning is there to serve you with a flourish.

Splash, renewed and larger, can seat about 200 people so come and enjoy yourself at what has become one of the most popular and talked about places in Baja Norte.

Susan A Mahalick has written for the Baja Times, Secretary of Tourism and has a book about Baja on Amazon called My Gold Coast—A Practical Guide. She is working on the third edition which should be out the end of June, 2015.