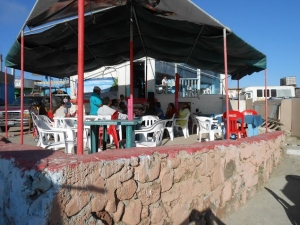 July 10, 2014 (Baja) - Many have heard of Puerto Nuevo as a lobster village, an adventure in eating experiences. Few have the same pleasure of knowing of Popotla, Km 33, just south of Baja Studios, there is an arch and a dirt road leading into a tiny village full of tiny eateries and curio shops. Unlike Puerto Nuevo, much more than lobster is served up, caught only minutes or hours before it is served to you. The entire village can be walked in a mere twenty minutes. One can bring in their own beverages most places. It is also possible to purchase fish to take home for that party or intimate dinner. 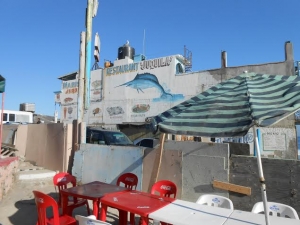 My friends and I went on Saturday night, arriving about 5:30 to be there before it could get too cold with the arrival of the marine layer. We passed by many vehicles parked on the side of the road, driving forward despite their presence. We were rewarded by getting guided into a parking space adjoining La Costa restaurant. The close by parking decided our eating establishment for us. A table was awaiting us complete with umbrella at the water's edge. The waves were rolling in and the sun was sparkling on the water. Seabirds abounded. The waves crashed onto the rocky shore. 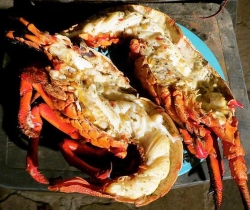 Our server came out immediately and asked our pleasure. A round of beer was ordered all around while we perused the menu. Prices ranged from $2.50 for a large white clam made to order with cheese (gratinos), or done up in garlic and tomatoes with chilies. I ordered the brown clam which is a bit bigger and cost $3. Wrapped in foil and broiled until the cheese melted and the clam was done to perfection, this was my choice of an appetizer. The most expensive items on the menu included oysters on the half shell, a dozen for $11 or lobster which was $12. One of us ordered the seafood soup, overflowing with seafood like fish, octopus, shrimp, and crab legs poking out the top. Another got the breaded shrimp dinner. I completed my meal with fish done up in lots of garlic, a common specialty in the Baja. Not a bone was present in the filet which covered half the plate,  and again the fish was done to perfection. Rice and beans and small salad accompanied my fish for $8. the ever present tortillas in a little warmer accompanied our food. My friend to the right ordered garlic shrimp which covered half of her plate with medium shrimp for $9. Everyone was completely satisfied with their food.

Popotla is a great place to try some beverages you might not have even heard of before. Tamarindo is popular down here as is Jamaica.Tamarind is a long pod (3” to 5”) and brown with a sour, tangy taste that is popular here as is a drink made from rice called Horchata. Jamaica is made from rose hips and is packed with vitamin C. Sweetened and served over ice, it is a nice alternative to iced tea if you are watching your caffeine intake. Or try coconut juice, chilled and quite refreshing.

The marine layer started to come in and Popotla started to empty out. We got back into the van parked beside the restaurant and headed home, replete with some of the freshest fish to be had in this little corner of the world, tucked away but not to be missed.

Susan A Mahalick has a new book about Baja on Amazon in both paperback and Kindle formats. She has written for the Baja Times, the Secretary of Tourism and San Diego Red. Her book, My Gold Coast---Baja, A Practical Guide, 2nd edition is a sampler of her already published works, giving the reader a good idea of what to expect when moving to Baja Norte.