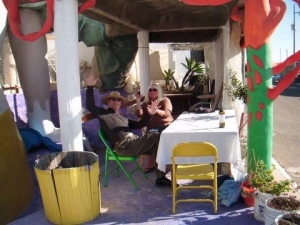 November 1, 2015 (Baja, Mexico) - “About an hour from the border, just south of Rosarito, Mexico, one can find a rare creature: a mermaid. Never mind that she’s made out of concrete and rebar. She doesn’t emerge from the ocean, but she provides a home and business for her maker. KPBS culture reporter Angela Carone visits the world’s only naked mermaid house,” KPBS reported. 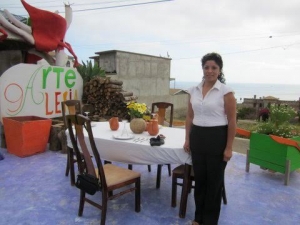 I visited with Armando Munoz and a friend of his, Zoë Jussel, on a gorgeous winter afternoon. We toured the structure which is way taller up close than it looks in the above video. Armando also has a sculpture of a 55’ woman in Tijuana, not where you would expect it to be at a cultural center or museum, but instead in a rundown neighborhood. He has no formal training as a sculptor and it has taken 19 or 20 years to get it to this point. Originally the city of Mexicali was going to fund the project but that never happened. He ended up selling a piece of property he owned in Tijuana to get started. It has taken so many years as funds need to be gathered to get to the next stage which is a common way to build in this part of Mexico.

Armando is as charming as he can be, claiming to love women of all shapes and sizes. He asks, “What is more beautiful than a woman?” He got my attention with that question. 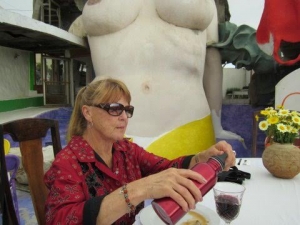 Besides being an artist, he also is a chef and uses La Sirena for dining. He is planning an art opening for figures that are copies of his famous La Sirena done in conjunction with a San Diego artist that dress the form in whimsical and well known female figures like the Statue of Liberty, Wonder Woman, Joan of Arc and movie stars. The figures will sell for around $650 each and about 30 are completed.

Sirena can be seen from the free road from Rosarito to Ensenada in Puerto Nuevo. Get directions when you contact him. Get ready for a pleasant and unique experience as you visit this much written about but little visited treasure that is poised to become more famous with both Armando’s charm and culinary capabilities.

It is a great place for an event if you want to enjoy a special and unique venue.

Armando can be contacted at:

Susan A Mahalick has written for the Baja Times, ezine.com and the Secretary of Tourism. She has a book on Amazon called My Gold Coast—Baja, A Practical Guide, 3rd edition. The paperback version is out and as well as the Kindle version.