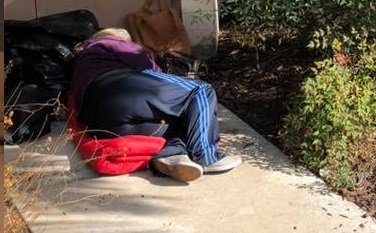 By Miriam Raftery
Photo by Dave Myers: A homeless person sleeping outside City Hall in La Mesa.
January 6, 2019 (San Diego’s East County) -- A proposed ballot measure titled California’s Compassionate Intervention aims to strike a balance between criminalizing homelessness, deemed by many including some courts, as too harsh, and ignoring the impacts of crimes committed by homeless people on communities – an approach the author sees as too lenient.
Mike Gatto, a Los Angeles attorney and former Democratic Assemblyman, believes his initiative “radically changes the state’s approach to homelessness.”
The measure would treat some existing crimes as “cries for help,” such as defecating on public transit or shooting up with heroin in public.  It would require that laws against such crimes be strictly enforced and in counties with 100,000 people or more, it would create special courts to determine whether crimes were committed due to economic needs (in which case the person would be referred to shelters, financial assistance, medical help and safety net programs), drugs (which would mandate drug rehab and treatment), or mental illness (which would require mental health treatment that could include hospitalization or treatment in another confined setting for up to a year.)
After the person fulfilled those requirements, his or her record could be expunged, so it would not affect their ability to get a job or go to school.  However, this would not apply to felonies or repeat offenders subject to longer sentencing.
The initiative language has been approved by the Attorney General’s office for petitions to circulate.  The author must collet around 620,000 signatures by May to qualify for the November ballot.
A recent poll by 3M Reearch found that 90 percent of voters surveyed said homelessness is California’s number one problem and 73% of those polled indicated they would support Gatto’s initiative. Pollster Chris Tapio said, “I’ve never seen 90 percent of the voters agree on anything,”  the San Francisco Chronicle reports.
Many Californians have grown increasingly frustrated with the growing number of homeless on the streets despite various attempts by municipalities to reduce homelessness. A recent Supreme Court action that lets stand an appellate court ruling prohibiting cities from arresting homeless people sleeping on sidewalks or in public parks if shelter is not available has protected the rights of homeless individuals, but also hampered law enforcement efforts to protect public health and safety.
But the measure does have opposition. The Western Center on Law & Poverty has voiced concern that the plan could “take California back into the dark ages of mass institutionalization of people with perceived or real mental illness” and could also lead to racial and class disparities in enforcement.
Cost of the program is another issue. The initiative calls for costs to be funded through the Millionaire’s Tax Initiative passed by voters in 2014. Gatto also argues that costs of his measure would be largely offset by cost savings on expenditures cities and counties are currently making to combat homelessness through arrests, incarceration, street cleaning and repeated hospitalizations of many chronically ill homeless people.