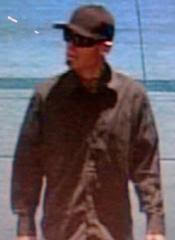 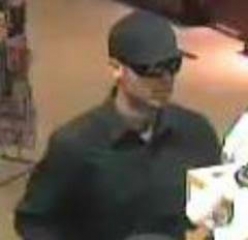 December 6, 2014 (San Diego)--The San Diego County Sheriff's Department wants your help in identifying and finding a man who robbed a bank in the East County on Black Friday.  It happened just before 5:00 p.m. on Friday, November 28th at the Wells Fargo Bank located inside Vons in the 13000 block of Camino Canada in an unincorporated area of El Cajon.

The suspect has been nicknamed the "Chit Chat Bandit" because he appears to be engaged in conversation with the tellers about banking business while he's robbing the bank.  After demanding money from two bank tellers, he took off and got away on a small green BMX-style bicycle.

No one was hurt.

The "Chit Chat Bandit" is also believed to have robbed another Wells Fargo Bank along Girard Avenue in La Jolla on Wednesday, November 26th.

Take a good look at these surveillance photos. The "Chit Chat Bandit" is described as a white man in his mid 30's, weighing between 160 and 170 pounds and standing about 5'10". He has blonde facial hair and a goatee beard under his bottom lip.

If you know who the suspect is or have any information about his whereabouts, call the Crime Stoppers anonymous tip line at (888) 580-8477. You may be eligible for a reward up to $1,000 for any information that leads to an arrest.