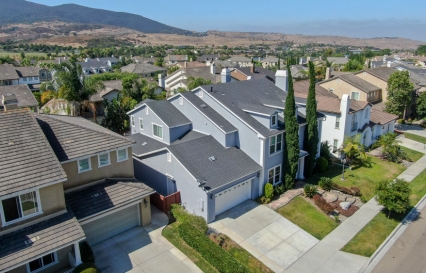 Photo:  Aerial view of suburban neighborhood street with big villas next to each other in Black Mountain, San Diego, California, USA.

It was the latest sign that the pandemic is hammering California’s economy — leaving many people without jobs or with slashed incomes — and came as lawmakers in Washington agreed to a stimulus package that would increase unemployment payments by $600 a week. In California, where unemployment benefits are up to $450 a week, the federal stimulus could allow some workers to receive more than $1,000 a week in unemployment.

But with California’s astronomical cost of housing, the increased unemployment checks could still leave many of the state’s homeowners unable to make their mortgage payments.

“I’m very pleased that Wells Fargo, US Bank, Citi (and) JP Morgan Chase have all agreed to 90-day waiver of payments for those that have been impacted by COVID-19,” Newsom said Wednesday.

Bank Of America agreed to waive payments for 30 days, Newsom said, adding that he hopes it “will reconsider and join those other banks that are willing to do the right thing by at least extending that commitment to their customers for 90 days.”

Many credit unions and smaller banks also agreed to the 90-day waiver. The agreement does not eliminate debt for California homeowners. Instead, it gives them a 90-day grace period in which to make each month’s payment. Homeowners who want to use the grace period should contact their lender to make arrangements. It’s available not only to people who have gotten sick from the coronavirus, but also to people who lost jobs or had hours cut because of efforts to curb the spread of the virus.

Bank of America’s plan — announced a week ago — allows customers to defer payments one month at a time, which could go on for a few months, and add them to the end of their loan term, said company spokesman Bill Haldin.

The mortgage relief doesn’t do enough to keep a roof over Californians as some Democrats would like. Calling attention to the plight of renters in the state, more than three dozen lawmakers sent Newsom a letter Wednesday calling on him to ban evictions statewide until the state of emergency caused by the pandemic ends.

“Around the state, there is enormous apprehension by countless renters about the upcoming April rent due date,” said the letter signed by Assemblyman David Chiu, a San Francisco Democrat who chairs the housing committee, and 37 other legislators from around the state. “At this time of crisis, we respectfully ask you to take action immediately to provide relief to millions of California renters and to ensure that sheltering-in-place policies can flatten the curve and reduce casualties due to the coronavirus.”

Last week, Newsom issued an order that allows cities and counties to stop landlords from evicting tenants who miss their rent, but it’s been widely criticized as too weak because it defers to local governments. Though some cities — including Los Angeles, San Francisco, Oakland, and Sacramento — have passed local rules temporarily prohibiting evictions, large swaths of the state have not.

On Wednesday, the governor said he was exploring whether a statewide ban on evictions is possible.

“We have a team reviewing the legal parameters related to that issue,” Newsom said. “The issues are much more complicated than they may appear.”

The Trump administration last week announced a moratorium on evictions of single-family homeowners with federally backed mortgages, but it does not apply to the vast majority of renters.

Editor’s note: This story was updated on March 26, 2020 with information about Bank of America’s loan deferment plan.