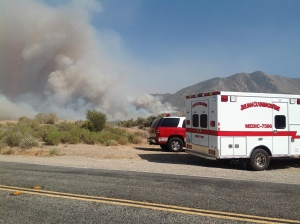 Update 9:40 p.m .-Shelter Valley residents will be allowed to return home for the night and Highway 78 has reopened. There are no updates yet on containment. 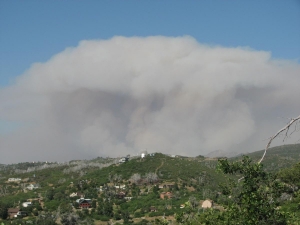 tained, Cal-Fire reports. The fire is approximately 10 miles east of Julian and burning away from the town, toward Borrego. 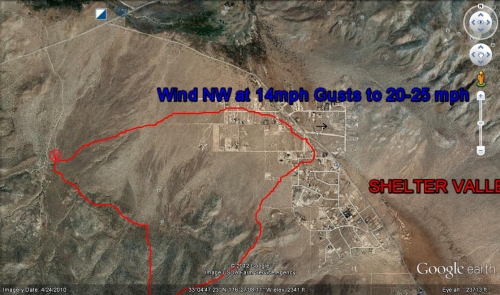 Update 4:45 p.m. - A Call Center has been established for concerned residents (619) 590-3160.  211 is also providing updates on incidents based upon Cal-Fire releases. Updates will also be posted on the San Diego County Emergency site at http://www.sdcountyemergency.com/

Update 4:25 p.m. - Roxanne Provaznik at Cal-Fire has provided this update:  This fire is now 1,000 acres, spreading rapidly, with a west wind pushing the fire to the east.  The fire is now burning onto Granite Peak.  The fire is burning grass within last years Great Fire.  The Incident Commander has ordered 10 more engines, 4 more fire crews, 2 additional helicopters, 4 additional bulldozers and 4 additional water tenders. The Incident Command Post is at S-2 and Hwy 78.

May 24, 2012 (Julian)--The Banner Fire burning east of Julian in the Banner Grade has leaped to 150 acres, Cal-Fire Battalion Chief Nick Schuler reports. Cal-Fire is preparing for evacuations of 100 homes in Shelter Valley.  Highway 78/S-22 is also being closed from the top of Banner Grade to the bottom, into Ocotillo Wells.

"The Fire has potential to be an extended attack (large) fire.

The fire is located in an area known as Cigarette Canyon close to the location of last year’s Great Fire. Cause is under investigation.

The Red Cross is setting up an evacuation center at the Borrego Springs High School.  "San Diego Sheriff's Department is handling evacuations and Animal Control is being contacted for animal evacutions," Cal-Fire's Roxanne Provaznik reported at 4:03 p.m.

Sign up to receive free Viejas Wildfire & Emergency Alerts via email at the top right side of our homepage and also receive a free weekly copy of East County Magazine with top news and events. You can also receive brief text alerts on your mobile device by following ViejasAlerts on Twitter. We recommend all of the above, to stay safe at home, at work and on the road.

At the north end of S2, the government is fighting a fire that is threatening homes and wilderness; but at south end, they've already begun construction of a wind farm that will ruin the town of Ocotillo, and completely obliterate the surrounding desert wilderness for many miles.

Make sense to you?