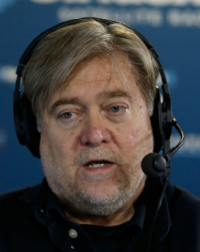 February 3, 2017 (Washington D.C.) – Decisions made this week are drawing criticisms over President Donald Trump’s handling of sensitive foreign policy and military decisions—and who is involved in making those decisions.

Top officials for past Republican and Democratic presidents have spoken out against Trump’s executive order giving political advisor Steve Bannon a full seat on the principals committee of the National Security Council, while limiting the Director of National Intelligence and Chairman of the Joint Chiefs of Staff from attending National Security Council meetings except when it considers issues in their direct areas of responsibilities, the New York Times reports.

Bannon’s last job was publishing Brietbart news, a mouthpiece for alt-right, white supremacist, anti-immigrant and conspiracy theory stories as well as conservative news.  Bannon is also an ex-Navy surface warfare officer who has  worked as an investment banker and Hollywood producer.

Josh Bolten, chief of staff for President George W. Bush, prohibited Bush’s top political strategist Karl Rove from attending National Security Council meetings.   A president’s decisions with those advisors “involve life and death for the people in uniform,” he has said, adding that those decisions should “not be tainted by any political decisions.”

Leon Panetta, former CIA director, defense secretary and White House chief of staff who has served under two past presidents, stated bluntly, “The last place you want to put somebody who worries about politics is in a room where they’re talking about national security.”

Bannon’s role in life-and-death decisions made by the National Security Council, and the absence of the nation’s top military and national security experts on that Council, take on added significance following  Trump’s first military order:  a raid last weekend on an al Qaeda branch in Yemen that went awry.  The Pentagon said the raid killed 14 militants but concedes civilians likely also died.  Medics at the scene reported that around 10 women and children were killed, Reuters reports.

President Barack Obama had been briefed on the planned raid during his time in office but had delayed any approval of the action, according to Reuters.

Also troubling are reports that President Trump was not in the situation room during the raid,  the Washington Post reports, a major departure from protocol.

Other reports this week indicate Trump made inflammatory statements in phone calls with leaders of Mexico and Australia, hanging up on the latter.  He has also provoked tense situations with Iran, China, and other nations, leading conservative columnist Jennifer Rubin at the Washington Post to conclude that incoming Secretary of State Rex Tillerson is inhering a “house of horrors.”

The conservative columnist concludes, “If he can persuade Trump to use a script on the phone and demand Bannon, who is primarily responsible for the travel ban fiasco, out of the NSC, he will earn our gratitude.”

Senate Democrats are calling for an investigation into the Yemen raid and one Democratic Senator has introduced a bill that would require removal of Bannon off the NSC and express the will of Congress for the top military and security officers excluded to be once again included in all NSC meetings.

But given the Republican majority in the Senate and House, action on either of those items would require support of a significant number of members in Trump’s own Republican party.

Listen for yourself the resounding praise Hillary has for KKK Grand Wizard and longest standing Democrat Senator Robert "Sheets" Byrd. The racism is strong in her.
https://youtu.be/oP-FZe0F8qU

Here is Hillary calling black people "Super Predators". Is there anything more racist than that? https://www.youtube.com/watch?v=8k4nmRZx9nc&feature=youtu.be

The Yemen raid as is normal was signed off on by the military all the way up the line. In fact it was planned under the last administration, and Obama reportedly didn't give his okay be deciding the raid should be undertaken on a moonless night. So the insubordinate "U.S. military officials" who blabbed their wrongful opinions to Reuters should be located and fired, and they probably will be, I hope by Trump.

This was proposed but Obama did not go forward with it.

Trump relied on intelligence that by this time was nearly a decade old. He did not include his Joint Chiefs of Staff Chairman and certain other important military figures in the decision.

While it is certainly possible that there is additional information Trump had that hasn't been disclosed for security reasons, we can only report on the facts that have been made public.  There are leakers inside the White House, not just those talking to Reuters, who are confirming the Reuters version of this story.

So totally untrue. Doesn't anyone research this garbage? Bannon is not a white supremist. Never a single bit of evidence to support it. What do we really know? Well we know that Hillary Clinton called all black people "Super Predators". Look up the resounding praise Hillary has for KKK Grand Wizard and longest standing Democrat Senator Robert "Sheets" Byrd who was a senator until 2010. The racism is strong in her.
As to the raid you don't know what was discovered. This administration won't make it public so they can actually defeat ISIS instead of create and fund them like Obama and Hillary. What is not just likely but HIGHLY probable is that some very high level targets were taken out or taken prisoners. Likely to be as high as an Osama Bin Laden. So before you put your foot further in your mouth at least take off your propagandist glasses and see what is really happening.

You are the one spewing "fake news".  We're going to make a rule around here; people can point out errors they think we made, and if we're wrong we'll gladly correct it. If we're right, we'll defend our reporting.  But we're going to just delete posts that falsely claim legitimate news is "fake news" since that is a propaganda tool being used to discredit legitimate journalists around the country.

Your statements about Bannon ignore the facts.

Under Bannon's leadership Breitbart dissolved into a cesspool of posts that were regularly racist,  anti-Semitic and women-bashing, too.  Their comments section is filled with the most vitriolic racist and anti-Semitic trolls. They even allow remarks about putting Jews in ovens, lynching blacks, etc. which is unconscionable. No decent publisher should tolerate that.

More here on Media Matters, a site that fact checks the media:

Many politicians have at times had some follower, donor, or fellow Senator with racial backgrounds. But when they start appointing racists to key cabinet posts, and overtly making racism statements as Trump has often done, we need to stop putting blinders on and excusing it.