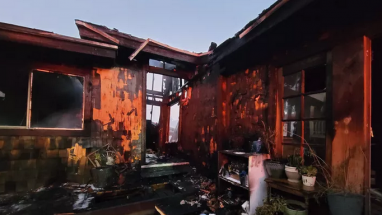 November 28, 2021 (Spring Valley) – Two homes in Spring Valley were destroyed yesterday by a fire started from a propane barbecue grill.

The fire spread to a house next door, where the owners were away on vacation.

The blaze caused an estimated $2 million in damage by the time firefighters extinguished the flames. Battling the fire proved challenging due to low water pressure in hoses extended 800 feet up a hill.

Fortunately, no one was injured in the fire.

One of the homes was owned by Robert and Cynthia Hathcock, who have lived there for 40 years. Their daughters, Natalie and Danalyn Barber, have started a GoFundMe account to help their family with cleanup and rebuilding.

According to the GoFundMe page, Cynthia Hathcock arrived home from running errands to find the house on fire. “She caught a few embers that burned her shirt, but got the dogs and people out unharmed.”

Over the next three and half hours, the site states, “We sat together and watched our family home burn. The firefighters did as much as they could to prevent the spread but the fire was so aggressive, it traveled to the neighbors and took their roof and attic too. Firefighters moved to defensive positions only 10 minutes into the fight when one of their own fell through the floor and the structure completely destabilized. “

The family is “devastated,” according to the daughters, who say that nothing in the main house was saved.  “ Childhood photos, wedding albums, clothes and keepsakes, heirlooms, custom family made furniture, medications, documents, keys to the cars, my dad’s accounting business... It’s all gone.”

The neighbors’ house that burned was owned by Wesley Scott and Sally Williams. Photo below right by Christina Bernadini. 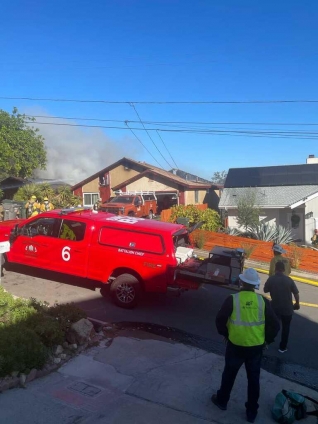