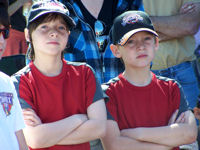 March 7, 2012 (La Mesa) -- Declan and Aidan Bardin of La Mesa dominated the results of the two-day Drew Ford/Kiwanis Club of La Mesa Soap Box Derby Rally Races on March 3 and 4 in La Mesa. Between them the Bardin brothers won four first place trophies, two second place and two third place. The boys are students at Literacy First Charter School in El Cajon.
“The way the Rally Races are done, we have a combination of single elimination and double elimination races,” explains Derby Director Dennis Wilkes. “This gives the kids numerous opportunities to run down the course as they move through the brackets. In the end it’s all about earning points, and a driver can earn enough points to be eligible to go to the National Soap Box Derby Race in Akron, Ohio.”
The race course is on Junior High Drive adjacent to La Mesa Middle School and Highwood Park. The Kiwanis Club conducts two rally races each year, in March and November, and one annual local race winners of which qualify for the national derby. This year’s local race will be on Saturday, May 19. The club and its sponsors provide financial support to the winners and their families for airfare and shipment of their derby cars to Akron. Derby cars are built from kits that cost about $650.

For more information and to register to enter an upcoming race contact Dennis Wilkes at 619-709-5777.

I must many thanks for that really excellent and beneficial gain access to. I've got to declare that individuals haven't ever found out about this details I've truly received noticed numerous brand-new specifics in my opinion individually. Thanks regarding sharing this useful and desirable information...............:)
uk-dissertation.com scam