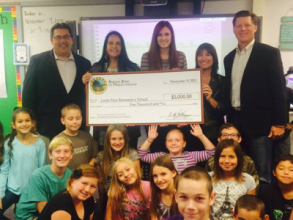 November 9, 2015 (Lakeside)-- Lindo Park Elementary School, a K-5 school that has served the Lakeside community for over 60 years, received a $5,000 education grant earlier today from the Barona Band of Mission Indians. The Lakeside school teaches students to excel in a global society by integrating a research-based curriculum in a 21st century environment.

The grant, which was sponsored by Assemblyman Brian Jones, will be used to purchase Life, Earth and Physical Science materials for the school’s fourth and fifth grade science laboratories.

“We are extremely proud to provide the students and staff of Lindo Park Elementary School with this grant money today,” said Clifford LaChappa, Chairman of the Barona Band of Mission Indians. “It is our hope that this grant will help the school take its science program to the next level.”

Since 2006, the Barona Band of Mission Indians has awarded over $2.5 million to 494 schools statewide to help bridge school budget gaps and share resources through its Barona Education Grant Program.

The program is the first of its kind in California created and administered by a Tribal Government. The goal of the program is to create strong educational opportunities for the children of California building upon the success of the Barona Indian Charter School, which operates under a continuous improvement model. Schools throughout California can apply for educational grants from Barona to purchase much needed supplies and materials that promote academic improvement. Each grant awarded by the Barona Education Grant Program is $5,000. Applications can be downloaded at http://barona-nsn.gov/education.