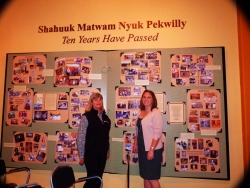 May 30, 2010 (Lakeside) – Shahuuk Matwam Nyuk Pekwilly. Ten years have passed, proclaims the newest exhibit at the Barona Cultural Center and Museum in Lakeside. The new exhibition, created by curator Laurie Egan, features a giant scrapbook with pages highlighting the facility’s first decade. The scrapbook includes displays on development of collections, exhibitions, and classes as well as the people--donors, volunteers, and elders--who helped make the center to preserve Native American culture and heritage a reality. 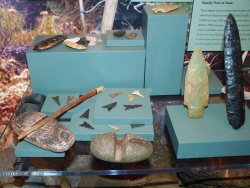 “I like to refer to this as the oldest historical society in San Diego, maybe anyplace—10,000 years of visual history,” said Cheryl Hinton, director and chief curator. “The highlight for me is participation of the tribal members. This is living, breathing history.” 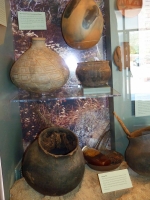 In addition to exhibits and collections, the facility offers classes, cultural events, language preservation, and more. 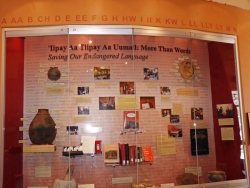 On May 20th, at the opening of the new exhibition, Caroline Mendoza was honored as recipient of the first Living Treasure award. A teacher who has dedicated her efforts to preserving the Yuman language, “She has twice been honored by a consortium of tribes and now, by a circle of her peers at Barona,” said Hinton. Mendoza was instrumental in creating a 696-page intertribal dictionary recently that took ten years to complete. An earlier version, published in 1988, had just 60 pages.

Throughout the museum, emphasis is given to contributions from tribal elders. An entire room is devoted to the history of the Barona tribe—the first time the history was recorded in written form in an exhibit titled “Barona, a story of 75 years of unity.” 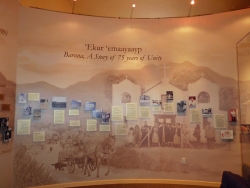 For thousands of years, “the story of the people was kept in their songs,” Hinton explained.

The Barona people were removed from their homeland of thousands of years at Capitan Grande culminating in 1932 because San Diego was running out of water and dammed the San Diego River. The Barona Indians had been given asylum on the land in 1853; in 1875 President Ulysses S. Grant’s executive order had created the reservation. Some of the adobe homes on the reservation were designed by famed architect Irving Gill.

The exhibit honors tribal leaders and documents each administration’s tribal councils and chairs, such as Catherine Banegas Welch, the first woman tribal leader back in 1953, who oversaw construction of the reservation’s first paved road. Ramon Ames was the last tribal leader to be called “Chief” back in the 1920s. Clifford La Chappa’s administration heralded in the new casino in 2003.  That same year, the Cedar Fire had a devastating impact. “The tribe lost one-third of their homes,” said Hinton. The tribe provided low-interest loans to help all rebuild within six months, she added.

A new research center at the facility includes a research library where students can look up facts on Native American history, whether working on an elementary school project or writing a doctoral dissertation. 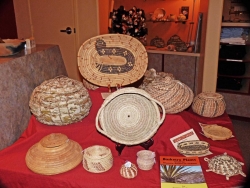 The museum also has a gift shop featuring traditional Native American art and crafts, such as jewelry and baskets. In addition, classes in cultural traditions, such as basket making and clay pottery, are offered to the public as well as to tribal members.

The Barona facility interacts with museums and historical groups across the nation. “We’ve worked with the National Museum of American Indians, the Smithsonian Institute, and locally, the Museum of Man, Natural History Museum, and Reuben H. Fleet,” noted Hinton, who is vice president of the Western Museums Organization. “We are very involved across the country and even internationally,” she said.

One recent exhibit called “Cosmic Serpent” combined Native American and Western science to help each better understand and learn from each other’s perspectives. The National Science Foundation project included NASA and Berkeley Space Labs. “We talk about how we can better understand science,” Hinton said, “and also focus on teaching scientists about the holistic idea of teaching science about our world…things that Native Americans have known for thousands of years.”

Given that history text books for years have tended to exclude Native American perspectives, curator Laurie Egan-Hedley notes, “It’s important to write history from tribal members point of view. We are empowering people to write their own history.” 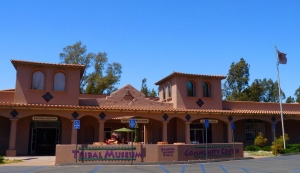 For the future, curator Laurie Egan-Hedley looks forward to the next ten years, hoping to expand the museum’s collections and foster wider use of the research center, which has a wealth of books on Native American history.

“It was a good learning experience,” she said of creating the “Ten Years Have Passed” exhibit commemorating the cultural center and museum’s first decade. “It’s been an honor to be able to facilitate this as a staff, and we are very proud of being allowed that privilege.”

The Barona Cultural Center and Museum is located at 1095 Barona Road in Lakeside.  Admission is free. For more information, visit www.baronamuseum.org.