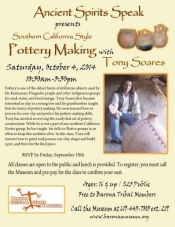 September 11, 2014 (Lakeside) -- The Barona Cultural Center and Museum invites San Diegans to learn the art of Southern California Style Pottery Making at a workshop led by Tony Soares. Pottery is one of the oldest forms of utilitarian objects used by the Kumeyaay/Diegueño people and other indigenous groups for the storage of water, food and seeds. Tony Soares will show participants how to grind and process raw clay, shape and build a pot, and then fire the final piece.

Workshop instructor Tony Soares first became interested in clay as a young boy when his grandmother taught him the basics of pottery making. He has assisted in reviving the nearly lost art of pottery construction and has taught his skills to several Native Americans nationwide in an attempt to keep the tradition alive.

The workshop is the latest in this season of Ancient Spirits Speak classes designed to keep tradition and culture alive. It will take place at the Barona Cultural Center and Museum on Saturday, October 4 from 10:30 a.m. until 3:30 p.m. The class is priced at $25 for the public and free for Barona Tribal Members (price includes lunch and materials). Guests must RSVP by Friday, September 19 by calling 619-443-7003 ext. 219. Class space is limited.