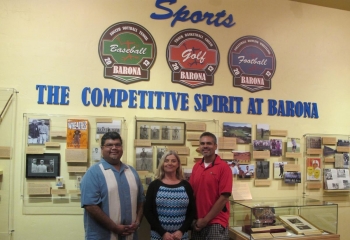 Sports: The Competitive Spirit at Barona is Now Open to the Public

The exhibition explores the stories of generations of Native American athletes who have played and excelled at sports. A retrospective from the early 1900s to 2013 reveals the Tribe’s deep devotion to sports and highlights famous Native American athletes from the past and present. The retrospective features 1912 Olympic gold medalist and football legend Jim Thorpe who is considered by many to be the greatest athlete of the 20th century, professional football great Pete Calac, 1964 Olympic Gold medalist Billy Mills and PGA Golfer Notah Begay, whose President’s Cup ring is on display. The San Diego History Center has also loaned photos of Major League Baseball’s first Native American star John Tortes “Chief” Meyers.

“The Barona Band of Mission Indians has a rich history of participating in competitive sports that is deeply rooted in tradition,” said Clifford LaChappa, Chairman of the Barona Band of Mission Indians. “In the early days, the local Tribes competed against each other in almost all team sports, but especially baseball and softball.  Having the best Tribal team was an honor and earned you a level of respect back in those days.”

Things have changed a lot since the early days but sports are still an important part of life at Barona.  The Tribe continues to encourage youth to be active and participate in athletics though Inter Tribal Sports (ITS), an organization that also figures prominently in the exhibition.

Created a decade ago to unify Tribal youth and Tribal communities through structured athletic programs, ITS began as a grassroots effort and has grown to include more than 3,000 youth from 22 Tribal communities. It currently reaches out to 1,000 youth annually.  In addition to keeping youth active in four age divisions in basketball, softball, volleyball, soccer and other sports, ITS also offers a variety of enriching and educational programs including cultural gatherings, sports camps and leadership activities.

Continued Chairman LaChappa, “Many great athletes have come from Barona and Inter Tribal Sports is one program that is helping to keep that tradition alive for future generations.”

A special section of the exhibition is dedicated to the people of Barona, and includes a display honoring the Chairman’s son, Matt LaChappa, who was a San Diego Padres second round draft pick in 1993 and Tribal member Pat Curo, currently a Barona Museum language teacher, who played against NBA Hall of Famer Bill Walton while in high school.

“Almost everyone at Barona plays some kind of sport,” said the exhibit curator Cheryl Hinton of the Barona Cultural Center & Museum. “There are so many wonderful stories about the competitive spirit of Barona Tribal members, including Chairman LaChappa, who was an avid athlete and played football for Long Beach State University.”

More than 200 photos of Tribal members playing sports and a digital roster of all Tribal athletes are showcased. Additional items on loan from Tribal members include a 100 year old lacrosse stick from the family of Barona Tribal member Willie Cruz, a 70 year old shinny stick made by former Tribal Chairman Bob Quitac from the Welch family Collection, and an ancient stone ball.

The Barona Cultural Center & Museum is located on the Barona Indian Reservation at 1095 Barona Road in Lakeside just one mile north of the Barona Resort & Casino.  It is open Tuesday through Friday from noon to 5 p.m., and Saturday from 10 a.m. to 4 p.m.  Admission is free.  For more information or to schedule a group tour, call 619-443-1003 ext. 219 or visit www.baronamuseum.org.