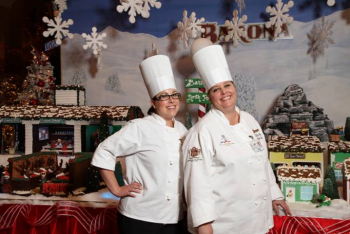 Measuring 50 feet long, the gingerbread village welcomes guests to Barona’s bustling food court and entrance to the Season’s Fresh Buffet.  The team spent more than 900 hours creating the winter wonderland on weekends and before and after their shifts.

“Chef Ashley and I had so much fun planning and building this village over the past year and now it is bringing us even more enjoyment as we watch all of Barona’s guests stop to look at it,” said Chef Erin DePompeo. “They are taking photos and talking about how it brings back memories of their childhood. And, every time they come back they see a new character or little detail. We are glad it is bringing so much joy to so many people.”

The village was inspired by Chef Erin and Chef Ashley’s favorite holiday memories. The display features a snow covered village complete with Santa’s Workshop with three rooms including Santa’s private retreat with a roaring fireplace, tiny elves building toys in Santa’s workshop and a gift wrapping room where the elves load up gifts on Santa’s sleigh. Out front there is a miniature Christmas tree lot and a pen where Santa’s reindeer are fed and rest up for the night of delivering gifts to good girls and boys.  Other areas of the village include a scene with beloved characters including Rudolph the Red Nose Reindeer, a polar bear plunge, a mine with elves gathering bags of coal for those who have been naughty instead of nice, a train station where an electric train can stop on its way around the display as well as a bakery, shops and even an elf tavern.

“This gingerbread village was a true labor of love for Erin, Ashley and Jose and it really captures the essence of the holidays,” said Rick Salinas general manager of Barona Resort & Casino. “Everyone who stops by to see the village is amazed by all of the artistry and incredible details. This is truly one of those things that cannot be described in words.  The entire Barona Resort & Casino is beautifully decorated for the season and this incredible display is just another reason to come out and see us for the holidays.”

Barona’s gingerbread village will be on display through December 30, 2013.