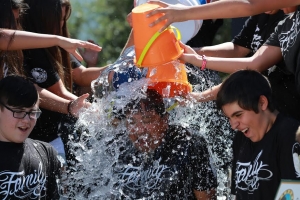 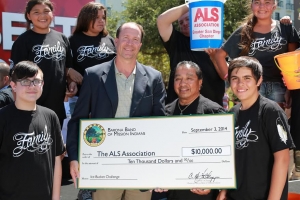 “On behalf of Barona, I am honored to accept this challenge by not only having a very cold bucket of ice water dumped on my head but also by making a $10,000 contribution to help wipe out this deadly disease,” said Chairman LaChappa.  “I’m going to pass the challenge along to three others, California Assemblywoman Lorena Gonzalez of the 80th Assembly District, Cahuilla Band of Indians Tribal Chairman Luther Salgado and Don Speer, the Barona Tribe’s longtime business advisor and friend.”

On Wednesday September 3, students from the Barona Indian Charter School took time away from classroom studies to dump the bucket of ice water on Chairman LaChappa at the Barona Creek Golf Club and also help present the contribution to Steve Becvar, the executive director of the ALS Great San Diego Chapter.

“The ALS Association Greater San Diego Chapter would like to thank the Barona Band of Mission Indians and Chairman Clifford LaChappa for their tremendous support of ALS through the Ice Bucket Challenge,” said Becvar.  “These are unprecedented times for this horrible disease and with this support, the impact and fight against ALS broadens and gets even more exciting. Thank you again!”

For more information on ALS or how to donate to the cause please visit www.alsa.org.