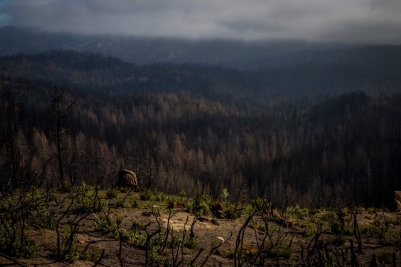 Photo:  A view of Big Basin Redwoods State Park in Boulder Creek on April 22, 2021. Most of the park burned in 2020's CZU Complex wildfire. Photo by Max Whittaker, courtesy of Save the Redwoods League

May 9, 2021 (Boulder Creek, Calif.) - In the annals of California history, no one has ever had to put a broken state park back together. There’s no guidebook, no rules. So now state officials and conservationists are attempting a complex and extraordinary Humpty Dumpty project: The reawakening of Big Basin Redwoods State Park.

The state’s oldest park, Big Basin was nearly erased in last summer’s lightning-caused wildfires. In one day, 97% of it burned, destroying buildings that had been standing for 120 years. 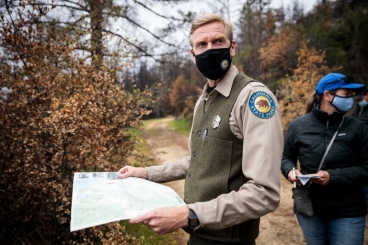 Photo, right:  California State Parks District Superintendent Chris Spohrer leads a media tour in Big Basin Redwoods State Park in Boulder Creek on April 22, 2021. Most of the park burned in 2020's CZU Complex wildfire. Photo by Max Whittaker, courtesy of Save the Redwoods League
One change Spohrer hopes to institute is more prescribed burns to lessen the forest’s fuel load. Big Basin has been clearing brush and trees with fire since the 1970s, but the complexities and legalities that often snarl burn plans means that there have been only four prescribed fires in the last 10 years, he said.
Despite its challenges, the park — which draws more than a million visitors a year — has a dedicated constituency. Both the Sempervirens Fund and the Save the Redwoods League raised nearly $750,000 in emergency funding and stand ready to continue that assistance.
One possible funding source, said Sara Barth, executive director of the Sempervirens Fund, is the Biden administration’s $2 trillion infrastructure plan. With the Vice President and Speaker of the House Californians, the time is right.
“I don’t see how this can’t happen,” Barth said. Her organization and others are lobbying in both capitals to free up funding to rebuild Big Basin.
“It’s going to be excruciating to have to wait while the forest recovers and parts of the park are open,” she said. “It’s really about whether humans can get their act together.
“My hope is whatever emerges better be worth it. I am hopeful for the future but it does take a long view. The trees will deliver, let’s be clear.”