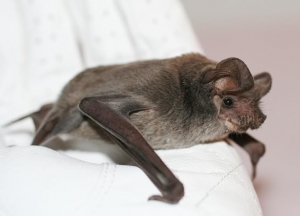 December 16, 2014 (San Diego’s East County) - And so goes the chiroptera-phobic Carly Simon song from the 1970s. But all the half-dozen or so children – and about that many adults –who attended “Batty for Bats” at Lakeside River Park Conservancy  know that bats are not even closely related to rats and their ilk. They’re more closely related to … you might want to sit down … well, us!

That is just some of what we learned at this presentation on November 22 by Project Wildlife volunteer and “bat team” member Cindy Myers. You may have seen pictures circulating on social media sites of baby flying foxes wrapped up in snuggly blankets and sucking on pacifiers, looking very much like burrito-wrapped Chihuahua puppies. Very high on the “Awwwww” factor. It gladdens my heart that this mammalian order, chiroptera, meaning 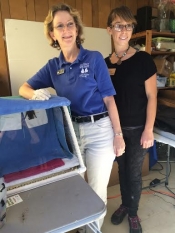 “hand wing,” seems to slowly be casting off centuries-old superstitions and untruths.

Education and activism are now helping us to understand the critical role bats play in the environment, and that was just part of Myers’ message that she shared along with two rescued Mexican free-tailed bats. Here are some of the many facts she presented about these amazing creatures of the night:

Habitat loss and destruction, along with persistent myths and misconceptions, are contributing to the decline of bat species worldwide. As a fellow bat-lover, I plead with you to take action to protect our 22 San Diego species by following Myers’ recommendations:

Now, let’s pour ourselves a shot of fine tequila and make a toast to the noble mammal that helps make agave plants happen: the bat.

Lakeside River Park Conservancy (lakesideriverpark.org) provides educational, recreational, and cultural opportunities at its location on the beautiful San Diego River in Lakeside. Besides “Batty for Bats,” the Conservancy holds other workshops, such as fire safety and prevention, and interpretive nature walks. Special thanks to Danielle Melody of the Conservancy for organizing “Batty for Bats,” and to Cindy Myers of Project Wildlife for sharing such critical information about bats with us.

Isn't that bat emergence from Bracken Cave just astonishing? I thought all the bats of Austin were the main attraction, but my husband preferred all the live music. ^..^

I've been to Braken Cave and the Congress Bridge, plan a trip to Austin. As dusk approaches hundreds of people gather with blankets, food and drink to see the bats emerge. A few bats will appear at first but their numbers increase to a cloud. Austin is a scenic city with many places to dine and has friendly people. https://en.wikipedia.org/wiki/Bracken_Cave