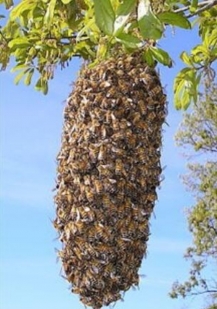 July 8, 2019 (San Diego) - U.S. beekeepers lost 40.7% of their honey bee colonies for the year ending April 2019, according to the latest survey by the Bee Informed Partnership, a nonprofit led by the University of Maryland.  That continues a national decline in recent years that has alarmed scientists, with causes ranging from pesticides to climate change to colony collapse disorder of unknown causes.

But in San Diego, where the county recently passed an ordinance to encourage beekeeping, the numbers are on the rise.  Now, after heavy winter rains caused wildflowers to blossom across our region, honey bees are swarming in record numbers to collect pollen used for honey production, the San Diego Union-Tribune reports.

Mark Kukuchek, president of the San Diego Beekeeping Society, says it’s been a “wonderful year for the bees” with plenty of flowers as well as ideal weather conditions.

That’s led to bee populations increasing – and when hives get overcrowded, half the colony will take off in a swarm seeking a new home along with a queen bee, leaving a young queen behind in the old colony.

If you spot a swarm, or clump of bees, hanging on a tree limb it’s most likely only temporary and they will move in on a few days.  But if bees invade your attic or enter the home through a chimney, you can call a beekeeping service to save the bees and relocate them.

A swarm in an attic can cause property damage, even collapsing a ceiling under the weight of massive honeycombs  If bees form honeycombs inside walls, honey can seep into interior walls in living areas. Soremoval is necessary.

But local beekeepers told the Union-Tribune that they have been overwhelmed with calls form property owners asking help to remove swarms from attics, sheds, chimneys and other locations this spring– so you may find a waiting list when you call.

What about the fear of Africanized bees? Local bee experts say the buzz is mostly overblown.

According to Kukuchek, around 80 percent of local beesare the result of mating between honey bees and African bees, which has “toned down” the aggressiveness of the African bees somewhat. It’s also brought some benefits – including faster honey production.

But there can be occasional problems. A huge hive in Escondido this spring weighed an estimated 100 pounds. A beekeeper called to relocate the swarm wound up having to kill many of them after they became aggressive and stung bystanders.

If you see a swarm in an open area, stay calm and don’t run; most likely, the bees will leave you alone and move on to a new location on their own, the San Diego Fire Department advises.

The San Diego Beekeeping Society provides a list of bee removal services—as well as educational materials and classes if you’re interested in learning how to become a beekeeper.

Sure are fascinating insects, and the honey they produce is not only tasty as we all know, it has fantastic health benefits! Have you ever watched a Honey Bee working a flower as it gathers pollen?