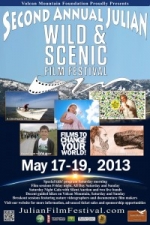 The weekend is packed full of entertainment to delight audiences of all ages, as well as other activities ranging from wine-tasting to a hike up  Volcan Mountain to a party with dancing and live music for festival attendees.

The festival kicks off Friday night, May 17.  Festival goers are encouraged to stop by The Blue Door Winery 2608 "B" Street, which will be keeping its doors open until 6:30 should attendees wish to stop by and sample award winning wines, sangria and hors d'oerves. The fun begins at Julian High School when the festival officially opens its doors for in-person ticket sales at 6:30, with live music and one-time only screenings of  “One Beach” and “A Fierce Green Fire’ beginning at 7:30, viewed from the comfort of 300 new well-padded seats. There will be a dessert reception afterwards.

Films will continue all day Saturday and the day will finish up with a Film Festival Party from 7:30 – 10:00 p.m. at Wynola Farms Marketplace! Popular Chris Clarke and Plow will play bluegrass music during the silent auction and you can dance the night away to Grand Canyon Sundown – both crowd-pleasers from last year’s festival. Films will continue all day Sunday from 9 a.m. to 6 p.m.

ECM spoke with Nancy Kramer and Terry Ross, the directors of the Julian Wild and Scenic Film Festival.

Q - Terry, how is this year's festival different than last year?

A-  We are excited to have a solid team of 10 on our festival planning committee - more than double the number from last year!  Our work began in mid-January when five committee members attended the Wild and Scenic Film Festival in Nevada City, CA  - and the weekend inspired us, not only with the incredible quality of the films and their extraordinary stories - but with the many activities the weekend offered!  So this year we have added several new components to our festival - and we are really growing!!  Last year we  purchased four hours of film and showed 24 films on Saturday and repeated them in reverse order on Sunday. This year we have purchased 11 hours of film and will be showing 44 films from Friday night through Sunday evening. In 2012 we had one visiting filmmaker and one local filmmaker - this year we have six visiting filmmakers in attendance  - and three local filmmakers!  And because of the generosity of Pat and Darrel Straube at Orchard Hill  and our local restaurant sponsors - we are able to accommodate our visitors in grand style!  Julian is rolling out the red carpet this year!

Q- Nancy, can we expect anything else new this year?

A - Yes. In Nevada City, I had an epiphany. So many of the films featured children and young adults, ages 11 to 25, who are really making a difference in their communities and I  realized that we should be doing more to include them in this film festival so our committee decided to get more proactive with our young people. We are taking a 75 minute film tour to Spencer Valley, the Elementary School and the Jr High School this year, in the early part of the week of the Film Festival, and for the first time, we will also be offering a kids program on Saturday morning from 9:00 a.m. to 10:15 a.m. – featuring films highlighting extraordinary and inspiring environmental contributions by young people and one really cute film about a 6-year-old named Silvie who plants and grows a patch of watermelon and then has to decide if she wants to part with  them by selling them.  Following the Saturday morning kids film session, Naturalist and educator, Greg Hill, will host a children’s workshop called “Wonders in Nature” at the Elementary School Garden area, right next to the high school. It will begin at 10:30 am and go till 12:00 noon so kids can make a craft and enjoy nature while their parents watch the films right next door at the high school.

Q - Nancy, what other activities do you have planned for this year?

A - We have brought back the popular docent-guided hikes on on Volcan Mountain both Saturday and Sunday mornings beginning at 8:30 a.m. with free transportation provided by Transit Van Shuttle for festival attendees to the trailhead leaving from Town Hall at 8:15. Many of our local musicians will be entertaining for about 20 minutes prior to each of the nine film session. And of course our big Film Festival Party and silent auction on Saturday night at Wynola Farms Marketplace!

Q -Terry, will there be any special workshops this year?

A - Yes, we are bringing back Chris Elesara who will do a documentary filmmaker workshop on Saturday during the lunch break and have added another documentary film workshop with Jim Karnik on Saturday from 4 p.m/ to 5:30 pm There will also be a special screening of Threatned about the California Sea Otter by local filmmaker Bill Wisneski during the lunch break on Sunday.  Another new highlight will be a filmmaker panel discussion with all 8 filmmakers on Saturday from 6 – 6:30 p.m. For those attending the Lunch and Learn workshops, Julian's outstanding chef Jeremy Manley (Jeremy's on the Hill) will have his new food truck parked at the High School.  Delicious vegan and vegetarian fare will be available onsite as well.

The Julian Wild & Scenic Film Festival committee has worked very hard to bring these fantastic films to Julian in a quality event that you won't want to miss. For prices including discounts for children and teens 2-17 years of age, a description of all 44 films, the schedule of film sessions and special events, visit  www.JulianFilmFestival.com  Advance tickets are highly recommended due to limited seating. On the website, you can also find a list of  sponsors (with sponsor applications) and volunteer opportunities.