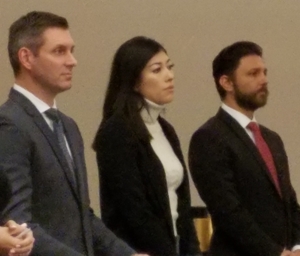 December 25, 2018 (El Cajon) -- The fraud and harassment case against El Cajon City Councilman Ben Kalasho and his wife, Jessica, tacked in a different direction on Friday, December 14th when litigants faced San Diego Superior Court Kenneth J. Medel and announced that they reached an agreement to attempt to resolve the case through mediation.

For purposes of the mediation, Jessica Kalasho’s attorney, Donald E. Wolfe, announced that he is now temporarily also representing Ben Kalasho. According to court records, James Finigan is now only representing the Kalashos in their case against their former attorney, Stephen Liosi.

Friday’s hearing took a decidedly more relaxed tone with the announcement of the mediation agreement. The case has been on the docket of the San Diego Superior Court for a year and a half.

The stipulation agreed to by the litigants orders them to participate in mediation discussions within 60 days and that those settlement talks be concluded by Feb. 20, 2019. They also agreed to continue (postpone) all future hearings and debtor exams until Feb. 22, 2019, when they will report back to Medel at a 10 a.m. hearing with results of the mediation discussions.

Should the mediation attempt to a settlement not be successful, the lawyers said that they will then re-evaluate the course of the case. 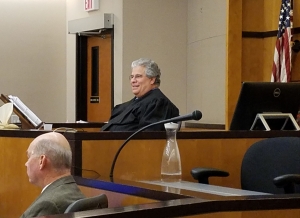 Reliable legal sources indicate that the San Diego District Attorney office is continuing to investigate the possibility of bringing criminal action against the Kalashos over their filing of an allegedly fraudulent mortgage. It is speculated they did this to shield their Fletcher Hills home from being used to satisfy any financial judgment against from the fraud and harassment case against them.  These sources also say that charges stemming from Ben Kalasho’s attack dog threat against this journalist and a legal process server last September could be also grounds for prosecution.

A spokesperson for the District Attorney Office says that the office does not comment regarding ongoing investigations or litigation.

Is there an update re the case of Kalasho using what he describes as a trained attack dog to threaten Paul Kruze?

Last we heard was DA was looking into whether to file charges.  After Kalasho threatened our reporter, a process server also filed a reporter with El Cajon Police saying he'd been threatened by Kalasho with the dog, too.  If a kid in a gang reportedly threeatened to attack someone with a dog -- twice--I suspect this may have been handled differently.  Of course there is still time, and it's possible charges could yet be filed at some point.

My other comments here were referring to the civil case in court against Kalasho on other matters (fraud and defamation etc.)  not the dog attack incident.

We will report as soon as there's either a settlement or if no settlement is reached, the matter goes to a trial.  Paul Kruze is tracking this for us but if anyone is aware of action in this case, please email the court documents or links to editor@eastcountymagazine.org.

Smirk is right. Will either one pay for their misdeeds? Probably not in the way we would like or imagine. Why? Because those who have money and or positions of power are rarely held to the same accountable standards of the less fortunate. A glaring example is Donald Trump, his family and close associates.
Filing false legal documents with the county is a felony and if Bessmon committed these acts while on probation he should serve time behind bars. Moreover, any settlement in the civil cases should include an admission of guilt. It's not like the world is unaware he's a lawless creep, that is well known. But the people of El Cajon have a right to the details of the lawlessness of any and all elected officials. https://i.imgur.com/Q3eM9L6.png
Only time will bear that out.