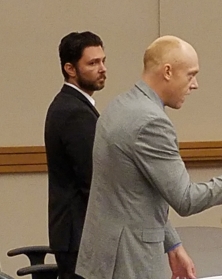 November 30, 2018 (El Cajon) -- El Cajon City Councilman Ben Kalasho and his wife, Jessica, are slated to return to Judge Kenneth Medel’s San Diego Superior Court room next week for yet another judgment debtor examination, a proceeding used by judgment creditors to find ways to collect a judgment from a defendant. What will be different this time is that Jessica Kalasho may be arrested by the Sheriff’s Department (with bail set at $5000) should she not follow Medel’s order to appear.

The hearing, coincidentally, is set to take place on the U.S.’s “Day of Infamy,” Dec. 7th, the 77th anniversary of the attack on Pearl Harbor, Hawaii by Imperial Japan upon the United States which caused the United States to enter World War II. Ominously, Kalasho received a warning from Medel not to rile the judge's "dark side" at the close of the proceeding. 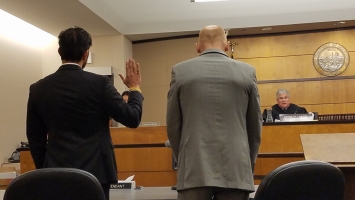 At the hearing in early November, Ben Kalasho was sworn in without Jessica before Medel, who was recently appointed to take over the case from Judge Timothy Taylor, who recused himself in early September. With his attorney, James Finigan, at his side, Kalasho claimed under oath that his wife had been admitted to an unspecified local hospital for an undisclosed serious illness. East County Magazine cannot verify this due to federal patient privacy laws.

Jessica Kalasho was also a no-show at an earlier judgment debtor exam on Aug. 28, for which Judge Taylor issued a bench warrant for her arrest with $500 bail. A paperwork snafu involving the San Diego County Sheriff’s Department reportedly delayed the warrant to be put into effect.

The judge caught Kalasho and his attorney by surprise when he ordered them to be subject to the debtor examination in November instead of continuing the hearing to a future date. (The day before, Kalasho had petitioned the Court of Appeal, Fourth Appellate District, Division One for an immediate temporary stay of the debtors’ examination. However, after having been considered by Justices O’Rourke, Aaron, and Irion, it was denied in a response signed by acting presiding judge, Joan K. Irion.) 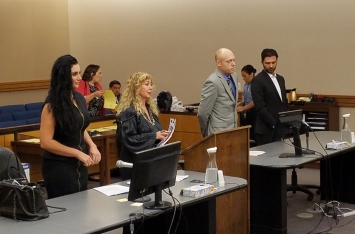 At the November cour appearance, after a short discussion involving attorney Jennifer Hasso, who represents attorney Lina Charry (one of the plaintiffs suing Kalasho), all litigants filed out of the courtroom into a small room adjacent to the main courtroom. Or so Hasso and Charry thought, as Kalasho and his attorney disappeared for some fifteen minutes prior to the interrogation.

East County Magazine’s petition to San Diego Superior Court filed earlier in the month allowing photography and audio recording of the court session was partially granted by Medel. He allowed ECM to take photographs of the initial swearing in portion of Friday’s meeting, but did not allow photographs or audio to be recorded of the actual interrogation, however he did allow this journalist to witness the proceeding and take notes. A court reporter was also present.

Shortly after Kalasho, Finigan, Hasso, and Charry sat down in the small side room, the mood at the small table quickly soured. With Kalasho’s arms tightly crossed over his chest, Hasso asked her first question about his knowledge of a number of corporations he has filed in the state of California. “I don’t know,” he said. He later acknowledged his ownership of Miss Middle East Beauty Pageant USA and the San Diego East County Chaldean American Chamber of Commerce (That Chamber has since been suspended due to the name’s trademark infringement; Kalasho now operates a new for-profit Middle Eastern Chamber of Commerce.)

Hasso continued, “Who are the officers of these corporations?” to which Kalasho responded, “Objection.” This in turn caused his attorney, Finigan, to argue about the legitimacy of some of Hasso’s questions of which had already been established in the earliest days of the lawsuit against the Kalashos.

Debtor judgment examinations, are, in a sense a cat-and-mouse game in a legal attempt to determine the assets of a defendant to satisfy a legal judgment. A plaintiff attorney may ask for as many court-ordered examinations as they wish and are legally allowed to go on a “fishing expedition” in order to obtain information with broad and targeted questions. Attorneys generally instruct defendant clients during Debtor Judgment Examinations to deflect questions by answering “I don’t know” or “I don’t understand the meaning of your question” or “Objection.”

On further questioning, Hasso established that neither Kalasho nor Finigan had brought to examination the corporate records which had been demanded and deemed vital to determine the extent of the Kalashos’ financial assets. 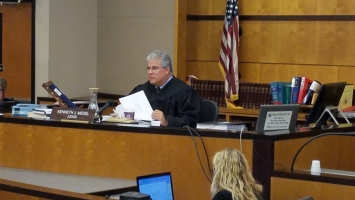 After another verbal fracas with Finigan, Hasso then abruptly ended the examination and all of the parties filed back into the courtroom. A discussion ensued at which time Hasso told Judge Medel that the examination was unproductive and that Kalasho did not have the documents which were demanded as a part of an earlier subpoena.

Judge Medel (photo, right) did not let pass the significance of the ordered Dec. 7th appearance by Jessica Kalasho on what is known as “Pearl Harbor Day.”

Finigan argued against the order, but Medel rejected his plea. Medel then issued a stern warning to Kalasho and Finigan. “I like to keep things in my courtroom light and easy. But I do warn you that I do have a dark side. I would suggest that you run and not walk out of this courtroom [before I change my mind],” Judge Medel said.

As Kalasho and Finigan walked out of the courtroom, Medel loudly called out to Kalasho, “Mr. Kalasho, be sure that you have the documents ready on Dec. 7!” 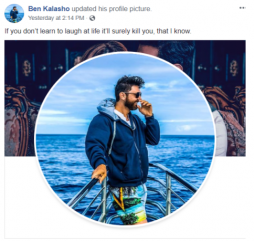 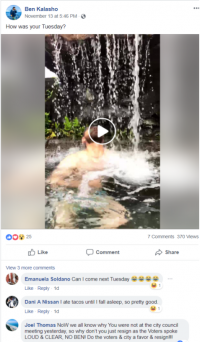 Although the Kalashos have declared themselves to be indigent and incapable of paying any settlement with the plaintiffs, videos posted by Ben Kalasho on his Facebook page in mid-November shows him on what appears to be a vacation, perhaps in a tropical locale or resort. One video shows a scenic beach, another depicts Kalasho on a boat, and a video shows Kalasho enjoying a dip below a waterfall.

Earlier this fall, Kalasho loaned his campaign $10,000 for his unsuccessful run in the first El Cajon City Council district election.. Kalasho lost to Councilman Gary Kendrick by approximately an 85-15% margin, but will still retain his council seat for two years, since he was elected in the city’s last at-large election two years ago for a four-year term.

Through a garnishment of a Kalasho bank account, one of the plaintiffs, Zhala Tafiq, a former beauty pageant contestant, collected $4781.05 partially satisfying her judgment against Kalasho.

Among the complaints filed against the Kalashos in court are allegations, backed by extensive documentation, accusing the couple of harassing and defaming multiple plaintiffs on social media. Kalasho also settled a separate federal lawsuit filed by Mark Lane, in which Kalasho agreed to stop blocking opponents on social media or deleting their posts, actions that courts have previously found to be unconstitutional in similar cases involving elected officials including President Donald Trump. 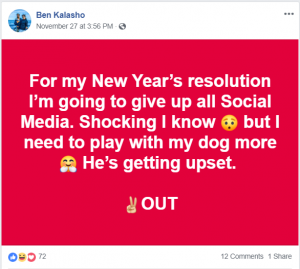 Notably in recent weeks, Jessica Kalasho’s Facebook page has gone missing. Ben Kalasho declared on Nov. 27th that as of the upcoming new year he will be abandoning his Facebook page, as well. He wrote, “For my New Year’s resolution I’m going to give up all Social Media. Shocking I know but I need to play with my dog more He’s getting upset.”

This case has been issued a continuance until 14 December at 10:00am.
Did ECM follow up on the 12/7 court appearance?

It's been postponed again, after Jessica showed up separately from Ben with her own lawyer.

Stupidity, arrogance, ignorance, and incompetence -- not a pretty cocktail of personality traits. Bessmon knows he is sure to lose in court, and he will lose big. Based on that knowledge, he is obfuscating. Judge Medel needs to hold him to the same standard to which all other Americans must meet. He needs to be tell the truth while under oath or be prosecuted for not doing so. And in the interest of justice for all Bessmon has victimized, it needs to happen soon.
This shows how the mind works as a classical example of Narcissism. Some people's sense of reality is not how most of us think and act. A narcissist truly cannot see themselves doing wrong, and believe they can do whatever they want, and get away with it.
Amazing the clueless nature of Mr. Kalasho and his Loyal, yet misguided spouse. The public looks on with no iota of sympathy for this misguided sociopath. Psychologists are having a great time studying this freak of political nature. Ben. Get a freakin clue, PLEASE.