June 7, 2012 (San Diego) – A judicial candidate who was removed as a Judge Pro Tem by the San Diego Superior Court days before the primary election has finished in first place.

Jim Miller, an El Cajon attorney who also drew a “lacking qualifications” rating from the County Bar Association in his judicial race, will compete in the November run-off election against fellow conservative Robert Amador for office 25 on the Superior Court.

Miller further raised controversy in the legal community after making indiscreet posts on his Facebook page, where he divulged details of cases he was hearing as well as dissing local attorneys,judges, and a law enforcement officer:  http://www.eastcountymagazine.org/node/9865.

Eliminated from the race is George Schaeffer, who served as both a prosecutor and public defender. 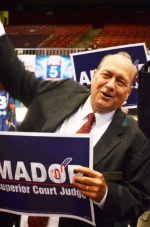 In other judicial races, Garland Peed and Gary George Kreep remain neck and neck, at 50.02% and 49.98% with some provisional and absentee ballots yet to be counted. They are vying for the Superior Court Office 34.

Schaefer and Roberts had been endorsed by the Democratic Party, which made no endorsement in Office 24, where both candidates are conservative Republicans.