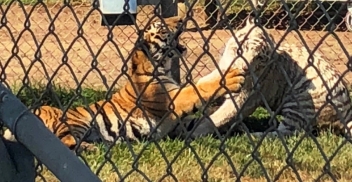 August 5, 2018 (Alpine) - Moka, a Bengal-hybrid tiger club rescued from smugglers attempting to cross the border from Mexico into the United States, was released into the Tiger Trails exercise area with his new companion, Nola, last week at Alpine’s hidden gem, the Lions, Tigers, and Bears sanctuary. Nola, a young white tiger, was recently rescued in New Orleans.

“Smuggling wildlife across the border occurs almost on a daily basis,” said Erin Dean, resident agent in charge at the U.S. Fish and Wildlife Service’s office of law enforcement in San Diego.

Despite the common occurrence, Dean added that smuggling a tiger cub in particular was quite rare.

“About 20 years ago was the last time a tiger cub was seized at the border,” Dean told East County Magazine.

Authorities in attendance noted that the two individuals responsible were affiliated with a cartel.  Joseph Misenhelter of U.S. Customs and Border Protection at the Otay Mesa Port of Entry confirmed that the individuals in question were U.S. citizens.

“What we normally see are drugs and merchandise, things of that nature,” said Misenhelter, “Animal smuggling is usually birds.”

When border agents realized they were dealing with a tiger, they immediately contacted U.S. Fish and Wildlife service to proceed, according to Misenhelter.

Healthy cats and dogs that were purchased and bred in the United States are allowed to travel with families with appropriate documentation, but although Moka was just a cub, it was evident to border officials upon questioning that this was an exotic animal. In no case can exotic animals be brought across the border. 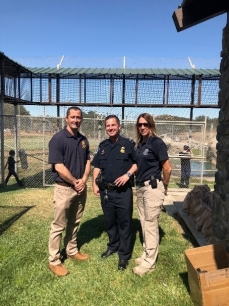 Moka was initially sent to the San Diego Zoo Safari Park, but was not condusive to the zoo’s breeding program, so he was sent to Lions, Tigers, and Bears, “a no kill, no breed sanctuary, that allows animals to live out their lives with dignity” according to their website’s mission statement.

“This is the first case [in which] I’ve dealt with this organization,” said David Shaw, of the Department of Homeland Security, Special Agent in Charge, San Diego, referring to Lions, Tigers, and Bears.

Shaw noted that the Department of Homeland Security usually deals with narcotics, but this case was unique even in terms of wildlife.

US Fish and Wildlife Service agents have a main concern right now for totoaba, a rare fish indigenous to the Gulf of Mexico, that is being smuggled across the border for the use of its bladder in a Chinese soup. In other words, the culinary delicacy of totoaba has threatened the species and also affects the lives of an endangered porpoise called a vaquita, that is caught in the nets of totaba fishers.

Sometimes, innocent tourists end up smuggling contraband items across the border. During interviews at the border, agents determine whether the individuals are intentional smugglers or simply misinformed citizens

“Any way that you can imagine drugs being smuggled across, we see wildlife as well,” said Dean.

Fortunately, Moka was able to find a home at Lions, Tigers, and Bears, a 93-acre property in Alpine started by Bobbi Brink in 2002. She got the idea while she was living in Texas opening a restaurant. Brink started reading classifieds for restaurant equipment and started seeing exotic animals for sale. She ended up volunteering with a woman who was raising the animals and later found out more about the exotic animal trade.

Brink has been lobbying to end the private ownership of exotic animals, many of which wind up abused or neglected.  She and her husband as well as staff and volunteers at Lions, Tigers, and Bears are dedicated to providing these animals with fulfilling lives in an ethical environment.

Brink told East County Magazine that there is no legal place in the United States where you can pet or take pictures with wild animals.

“No one is allowed in [the cages]; we are completely hands off,” said Michele Moberg, who works as a volunteer handling visits. 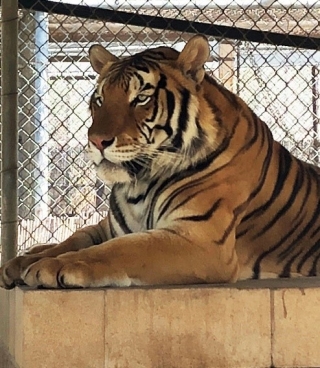 The animals live in a series of spaces and can be ushered into new spaces while their quarters are cleaned. Moberg notes that animals in the wild don’t really need people, so it’s healthier for these animals to dwell in habitats more similar to what they would find in nature.

“We can’t put these animals in the wild, so we try to give them their best lives that we can possibly provide so they can at least live out their life in dignity,” said Brink.

Brink used her own capital to start the organization and was self-funded for several years.

“My husband and I bought this property, and we did this 14 years without a salary,” Brink said.

Lions, Tigers, and Bears now has larger sponsors and is a registered, verified sanctuary that operates solely from donations and revenues from visitors. The site also has an education program so people can visit and learn about wild animals and the issues of wild animal trade.

For more information on getting involved, please visit https://lionstigersandbears.org/.