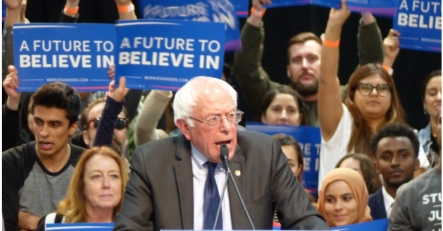 Update Oct. 4:  Sanders has been released from the hospital. His doctors released a statement, along with the Sanders campaign, confirming the Senator had a heart attack but has "good expected progress."  Senator Sanders issued a statement indicating "I feel great, and after taking a short time off, I look forward to getting back to work.”

Update Oct. 3:  Jane Sanders released a statement which reads in part: "Bernie is up and about. Yesterday, he spent much of the day talking with staff about policies, cracking jokes with the nurses and doctors, and speaking with his family on the phone. His doctors are pleased with his progress, and there has been no need for any additional procedures. We expect Bernie will be discharged and on a plane back to Burlington before the end of the weekend. He'll take a few days to rest, but he's ready to get back out there and is looking forward to the October debate.”

His campaign has cancelled all events until further notice. Sanders was slated to visit California this Thursday and Friday.

His campaign’s senior advisor, Jeff Weaver, issued a statement Wednesday which says Sanders is “conversing and in good spirits” but will be resting up for a few days.

Late this afternoon, Sanders tweeted, "Thanks for all the well wishes. I'm feeling good. I'm fortunate to have good health care and great doctors and nurses helping me to recover. None of us know when a medical emergency might affect us. And no one should fear going bankrupt if it occurs. Medicare for All!"

The 78-year-old Senator was hospitalized just hours after his campaign announced a record $25 million in contributions in the third quarter of the year. The oldest Senator in the race, he has a family history of longevity.

But rigors of the campaign trail can take their toll, and it is unclear how the health setback may impact his presidential aspirations. Politico reports that  the Sanders campaign has canceled a $1.3 million ad buy in Iowa slated to air this week, though a campaign spokesman says the cancellation is only a postponement.

This is the second time Sanders has run for president.  In 2016, he came in a close second after Hillary Clinton in the Democratic primary, galvanizing many young voters and inspiring many new voters to head to the polls.  He is the first major presidential candidate to openly espouse democratic socialism, calling for policies such as universal healthcare for all Americans.

Several of Sanders’ Democratic rivals in the primary have tweeted get well messages, including California Senator Kamala Harris, who wished Sanders a speedy recoverand called him a “fighter.”

Senator Elizabeth Warren, who will hold a town hall in San Diego tomorrow night, also sent Sanders best wishes, adding, “I hope to see my friend back on the campaign trail very soon."