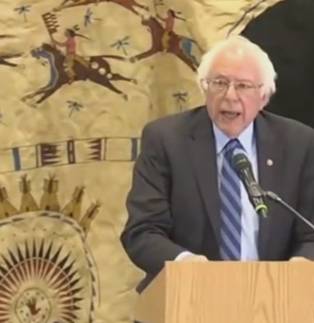 May 15, 2016 (Pine Ridge, Sd.) – When Democratic presidential candidate Bernie Sanders spoke in San Diego, he said, among other others, “This campaign is about the Native Americans.“  I don’t think I’ve ever heard a politician even talk about Indians let alone include them in his race for President.  Should I be happy that someone is at least talking about the 566 tribes?   We are a mere 1.6 % of the voting population.  Of course, we know that only a third of all Indians live on reservations.  We are many urban Indians.  And we vote.

I am no stranger to what Bernie Sanders stands for.  I’m one of those committed political animals that tunes in to C-SPAN and watches politics live.  Bernie is a powerhouse in Congress.  He has been for years.  He was on the short side of the vote but many would say on the right side of history on issues including the Vietnam War, the Patriot Act and the Wall Street bailout--often one of only a handful of dissenting votes, taking courageous stands.

“When I am President I will begin a new relationship with the Nations as one sovereign to another sovereign nation.  We will honor our treaties and agreement,” he has pledged now, during his presidential candidacy.

I looked it up and for 35 years he has voted to uphold sovereignty for the Nations--in spite of the fact that he is from Vermont a State that has not one Reservation or casino.  Is he pandering to Indians or does he really care?

“We will develop if I am elected President a new relationship with the Native American people. We will honor our treaties and agreements,” Senator Sanders said at a community meeting in Pine Ridge, South Dakota on Thursday in the very heart of Indian Country. "We owe a debt of gratitude to the Native Americans that can never be repaid.”

He spoke of changing the “fundamental relationship” between the U.S. government and the Native American community.  He spoke of high poverty, unemployment, and substance abuse in Native American conditions. Sanders decried the wealth inequality in the U.S. , then called for creating jobs,  investing in building affordable housing and infrastructure, making healthcare a right and college education free, protecting nature, clean air and water.  “One of the most important lessons that Native Americans have taught our nation is the importance of living with nature,” he said adding that failing to live with nature can “destroy our planet.” He also pledged to address climate change through a transition away from fossil fuels and to sustainable energy.

“Together, we are going to create the jobs, and the healthcare and the educational opportunities that people here at Pine Ridge and across Indian Country are entitled to,” the Vermont Senator concluded.