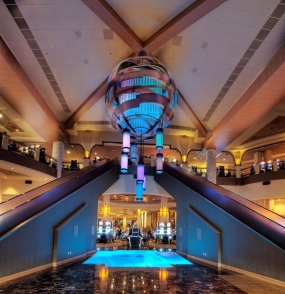 September 15, 2011 (El Cajon) – “No surface is unchanged,” Michael Tabor, director of marketing at Sycuan Casino, said in a preview tour of the $27 million remodel. Tabor has dubbed the project “Casino Reimagined.” The entire building was gutted one section at a time, remaining open for business 24-hours a day throughout construction while a top-flight design team created the architectural metamorphosis.

On September 24 and 25, Sycuan will host a grand reopening celebration. The public is invited to the event, which will include $75,000 in cash and prize giveaways.

The most spectacular feature is a dramatic 3-D light fixture welcoming guests in the lobby. Synchronized to music, the two-ton fixture displays programs simulating falling water, an erupting volcano, and more, spilling cascading lights down onto a video floor below. View a video of the light show. 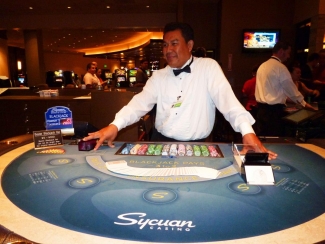 “We come from a Disney background and we’ve tried to bring a lot of that magic,” Rock Hall, owner of Technifex, says of the one-of-a-kind fixture, which contains over 6,000 LED bulbs yet is also energy efficient.

“It only pulls 14 amps,” said Gary Strawbridge, executive facility director at Sycuan, who said of the complete remodel, “What a project!”

The team responsible for the makeover also included project architect Hnedak Bobo Group (HBG) and Cleo Design, both renowned for designing and building casinos in Las Vegas and elsewhere, as well as Swinerton Builders and KCM Group, which served as project manager for the renovation project. 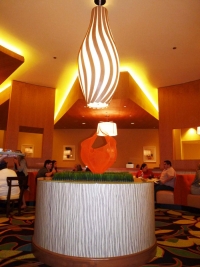 The renovations included opening up the interior so players can now look through the length of the casino. A sweeping staircase traverses the width of the casino floor. Architectural ceilings, woodwork, new tile and stonework and vibrantly hued carpets aim to make the casino “its own work of art,” a press release issued by Sycuan states.

One of the first phases, completed in May, was Paipa’s Buffet. Moved to a new location in the casino’s smoke-free wing, Paipa’s now features bold colors, an iconic flame sculpture, ample and comfortable seating.

The executive chef has also expanded menu offerings at the buffet, which now includes “surf and turf” complete with snow crab legs, shrimp and sushi as well as prime rib, steak and chops. The buffet also has a pizza station, “comfort food” station, and an upscale dessert bar. 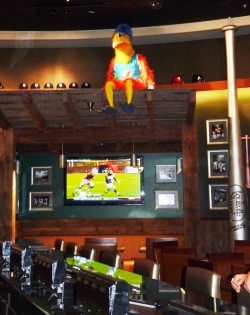 Sports fans will find plenty to cheer about in a new GameDay Sports Bar & Grill filled with memorabilia from local and national sports teams and sports celebrities. The bar has special sections for various sports, from golf and auto racing to football, basketball and baseball. Think of it as a museum where you can also get a drink while watching your favorite sports team on 39 big-screen TVs and five projection TVs. 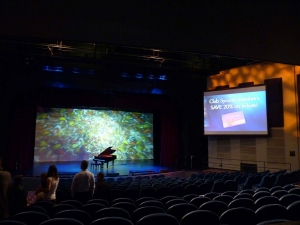 A 457-seat “Sycuan Live & Up Close” theater boasts high quality acoustics in an intimate setting. “From the back seat, you feel like you’re up front in your living room,” Tabor quipped. The theater brings in entertainment including concerts, comedians and more.

Other remodeled areas include the 880-seat bingo hall (complete with “cosmic bingo” featuring special effects), Sunset Deli, Snack Bar, and even the restrooms.

Originally opened in 1983 by the Sycuan band of the Kumeyaay Nation, the casino was the first Native American gaming operation in San Diego County.

It started as a “dry” casino but obta 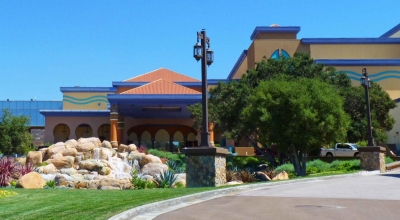 ined a temporary alcohol permit two years ago and now, a permanent alcohol permit after a study found no increase in alcohol-related accidents in the area. The tribe has opted voluntarily not to serve alcohol on the casino floor, restricting alcohol to designated areas including restaurants, bars, and the Primrose Room.

Casino profits have enabled the tribe to not only improve life for tribal members, but also benefit the community through gifts to numerous civic and charitable organizations. The tribe has since established the Sycuan Tribal Development Corporation and went on to acquire the Singing Hills golf and tennis resort (now Sycuan Resort) as well as the historic U.S. Grant Hotel in downtown San Diego and more. 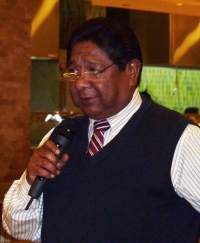 “In 1875, President Grant put us here, on one square mile,” tribal chairman Daniel Tucker reflected, noting that with the tribe’s acquisition of the U.S. Grant Hotel in its historic territory downtown, “Now we’ve come full circle.”

He praised the tribal council for giving the casino remodel design team ample freedom to exercise its creativity, adding that the team has done “a tremendous job.”