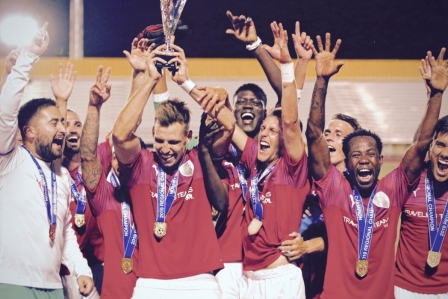 July 22, 2019 (Mesa, Ariz.) - This past Saturday, ASC San Diego hoisted the 2019 National Premier Soccer League Championship trophy for the first time in club history after a stunning 2-1 victory over Southwest conference rivals FC Arizona. In an all odds against them match, ASC San Diego battled the frustrations of travel, climate, and injuries to overcome an FC Arizona side who boasted a near perfect (nine wins, two draws, no losses) home record this season. After making the 5-hour road trip east to Mesa, ASC were greeted by a scorching 108°F kickoff temperature and a fiery home crowd contingent to match.

Wiith everything seemingly against them, San Diego’s team took control of the match from the start of the whistle. In the 4th minute ASC saw their first chance after forward Anthony Virgara charged down the left side of the field off the break. Seeing nothing was on, Virgara smartly held the ball up and found a streaking Ozzie Ramos at the top of the box. The midfielder who scored from distance against Crossfire Redmond the week before, unleashed a rocket that sailed just wide. Although not finding the back of the net, Ramos’ effort was an indication to Coach Ziggy Korytoski and the ASC faithful that their team was embracing the challenge of making club history by defeating one of the top teams in the league. 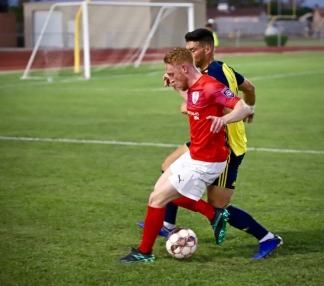 In the 15th minute, midfielder Ewout Gouw took possession of the ball off an ASC counter, this time charging down the right side of the field. In a desperation tackle a FCAZ defender who was just exposed by Gouw moments before, slid through Gouw earning himself a yellow card and an ASC free kick from 20 yards out.

The left-footed Ramos took the first step of helping achieve team history, as he nailed his shot off the top corner of the crossbar where the ball took a deflection into the middle of the box. Chaos ensued as each team tried to muscle the ball in or out of goal. Eventually, team captain Kuba Waligorski was the one to force the ball into the back of the net to make it 1-0 in the 17th minute.

In the 27th minute, FCAZ nearly equalized with a thunderous free kick at the top of the box. To the relief of the away support, the shot flashed just over the crossbar and safely out for a goal kick. ASC veteran and now legend Jean Antoine launched the ball on a dime 60 yards up the field to the feet of Virgara. The forward dashed down the line as he did in the beginning of the match that set up Ramos’ chance. Instead of waiting for his options, like a true forward he took on his defender.

As Virgara skipped past the FCAZ center back, a second FCAZ defender made a final last ditch clearance attempt to try to prevent the ASC man from releasing a shot. Although beating Virgara to the ball, he also beat the keeper as his clearance smashed into the net for a FC Arizona own goal in the 29th minute. ASC San Diego took the 2-0 lead into the second half where only 45 minutes separated the team from a West Region championship and National Semifinal place.

The second half saw a much more even contest. FC Arizona who were in unfamiliar territory being down 2 goals to nil at home, began very direct and caused trouble to the ASC backline. In the 53rd minute, ASC fell victim to an FCAZ counter as forward Omar Nuno received the ball at the top of the box. Putting the ball onto his favored right foot, the 2018 NPSL Golden Boot Winner fired an unsavable shot to near post to cut the deficit to one. With nearly an entire half to play, the men in red took the early second half let down as a wake up call. ASC regrouped and reorganized as they looked to continue to play the soccer that earned them their two first half goals. As the clock began to wind down, FCAZ pushed more and more numbers forward giving Antoine a much more active second half. 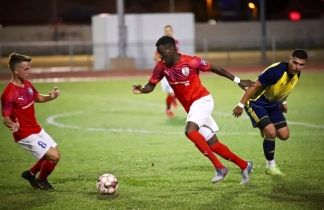 In the 73rd minute, Antoine made the save of the match as he dove to his right to snag a lighting bolt of a strike destined for the inside of the far post. This proved to be one of FCAZ’s final opportunities to send the match into extra time. Desperate to avoid extra time and possibly penalties for a third straight match, ASC dug in with maximum effort to see out its biggest win in club history.

Becoming the fourth team in a row to win the West Region Final on the road, ASC San Diego will now be tasked with representing the West in the 2019 NPSL National Semifinal. San Diego’s team will make the cross country journey all the way to Long Island, New York to face the #1 seed and one of the most storied soccer clubs in America, the New York Cosmos.  Three down, two to go.