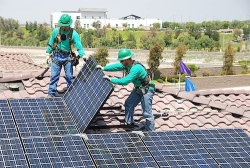 April 5, 2014 (San Diego) –“The San Diego County Planning Commissioners and Board of Supervisors have an obligation to look out for the greater good of the people of San Diego,” Timothy D. Schoechle, PhD, an international consultant on smart grid expert technology, engineering expert, and author of the report Getting Smarter About the Smart Grid wrote in his comments to the County’s planning director opposing Soitec’s plan to industrialize rural East County with massive solar modules that other experts have said could destroy the entire ecosystem of the region.

Instead, Dr. Schoechle lays out a detailed case for a saner, safer alternative—and why current government policies are polar opposites of what’s needed to protect the public against rapacious energy corporations.

“The answer is that our preference should be for smaller-scale distributed at or near the point-of-use, and on fostering the markets for such technologies and products. Every dollar sucked up by a large utility-scale project is a dollar that will not be invested in rooftop solar, clean inverters, small hydro, small wind, and battery storage and other mass market technologies that result in long-term community based jobs,” he wrote, proposing new policies to encourage rooftop solar and community-based solar gardens as a better path for residents, ratepayers and taxpayers in our region.

San Diego has about 7,000 megawatts of rooftop and parking lot solar capacity in the city alone (the largest consumer of electricity in our county)—and only 150 MW or so has been developed thus far, or about 2%.  Utilizing as little as half of that could meet the 100% of the city’s electricity needs, engineer Bill Powers, a founder of the San Diego Energy District Foundation, has calculated in a report titled San Diego Smart Energy 2020: The 21st Century Alternative.  Jim Bell, a local planning expert, has long made similar claims.

The Edison Electric Institute, the power energy’s own expert, recently issued a report challenging the industry’s business model due to declining economies of scale.  The report, titled Responses to a Changing Retail Electric Business, advised utilities that their basic business model was threatened and suggested that they change their way of thinking. Instead utilities began attempting to suppress net metering tariffs that help make solar financially viable for homeowners (an effort that largely failed in California, where consumers recently won 20 more years of protection for net metering.)

But the County of San Diego, along with the state and federal government, continue to perpetuate policies that allow only consideration of utility-scale projects to meet renewable energy goals.

Proof it can work

Germany produces solar power from 1.2 million sites scattered across the country—85% of those on rooftops, yet Germany has less sunshine than the U.S. Germany’s success fueled Chinese investment in photovoltaic (PV) production, leading prices to drop sharply and make rooftop solar far more affordable than in the past. Yet our government continues to incentive the dinosaurs of the industry –industrial scale solar and wind projects in desert and mountain areas, each requiring massive transmission lines, substations, and the destruction of public and scenic lands.

In the past, solar has been limited by intermittency, so the conventional solution was to install gas-fired peaker power plants as backup, burning fossil fuels.  Now however a new generation of smart inverts enable localized grid balancing and stabilization, Schoechle indicates. He cites various other technology improvements as well and adds that Underwriters Laboratory began certifying inverters in late 2013 that comply with IEEE standards for advancing technology for humanity.

He further states that a distributed grid system relying on solar particularly is “just as efficient at either small or large scale”  and that a smaller distributed system, with smart grid technology now available, can actually be more efficient than large, centralized power. Moreover smaller systems can utilize conventional smaller scale financing as with homebuilding and construction.

Thus large-scale generation and transmission projects in the future are “unneeded,” he concludes, further adding, “Concentrating solar power projects represent an attempt to hammer a “Square peg into a round hole. The sun shines everywhere. Mirrors in the desert or complex tracking CPV arrays, like Soitec, make little sense, especially when they also require big transmission.”

Big desert solar projects have a troubling legacy. Ivanpah, the nation’s largest, is burning birds alive and has become the poster child for how not to do solar; the Wall Street Journal reports Ivanpah costs four times more than a gas-fired plant but will produce much less electricity, requiring large tracts of land.  Some have called this “greenwashing” fueled by massive subsidies to the energy companies.

Soitec estimates its projects here in Boulevard, if built, would produce about half the power of Ivanpah on 1500 acres of rural and wetlands at “excessive cost to ratepayers and taxpayers and with transmission loss of 7-14%, Schoechle observes.  Critics contend the projects new technology is unproven and that geographical clustering decreases grid stability, since it’s vulnerable to extreme weather or wildfires, for instance. A distributed model relying on many rooftops would add stability, by contrast.

Wind and solar development on remote sites and on public lands not only brings an array of problems, but also “increased externalized public costs,” Schoechle notes, citing an array of problem ranging from hazards to wildlife to electromagnetic pollution and potential health impacts on humans.

Yet state and federal policies have no requirement for project enviornmental impact reports to weigh distributed generated alternatives such as rooftop solar -- and last week a judge in San Diego ruled that plaintiffs in Boulevard have no right to demand that such alternatives be considered. So it's up to political leaders to do the right thing and impose such rational requirements for a cost benefit analysis of "alternatives" other than just more utility-scale projects in other areas close by, as was the case for the Soitec EIR and others we have examined.

A brighter alternative for the future

“Rather than continuing on an unsustainable path attempting to prop up a failing and unsustainable system, it is time for regulators, local and state leaders, ratepayers, taxpayers, and utilities to recognizes and embrace the fundamental changes taking place in the economy of electricity,” he concludes.  “A renewed interest in community-based initiatives, such as municipalization and community choice aggregation alternatives, suggests a growing recognition that localization and DER—generating and managing electricity closer to the end user—are among the best ways to access and accelerate affordable renewable energy and stimulate related local business and employment,” he added.

The international expert closed with this advice for San Diego’s leaders: “We are now offered an opportunity to reshape our electricity system in a way that will bring clean, sustainable, and abundant energy as well as new innovation, products and jobs—all without sacrificing our environment, our public lands, our wildlife, our rural landscape, and our quality of life.”

“The San Diego County Planning Commissioners and Board of Supervisors have an obligation to look out for the greater good of the people of San Diego."--In your dreams, Doc. That's not the way the world works, with public corruption at every level.
Excellent article and I completely agree with the need to go locally over these massive-scaled operations that only benefit the utilities. We must keep bringing these benefits front and center so that they will be implemented at a faster pace. Clean local energy like Community Choice Aggregation, which will happen in San Diego are the best ways to quickly stop our addiction to fossil fuels. Thank you for your insights and I for one will be following and supporting yours and other local clean energy advocates.