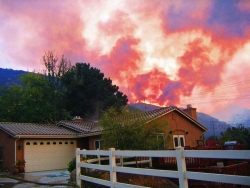 November 7, 2009 (San Diego's East County)--Embers are mostly to blame in structural losses from wildfires! Recent wildfire damage assessments have shown that most structures ignite from embers landing in or on combustible materials of a house (entering the attic through unprotected vents, or on a wood roof), or from radiation created by burning vegetation or other combustible materials adjacent to the house. An ember may be blown into an un-pruned juniper shrub, ignite the dead branches, which would burn the wooden eaves above it and then engulf the entire house.

After the Witch Fire of 2007, experts analyzed 3,000 homes to determine why some survived and others did not, despite facing similar wildfire conditions. They found that homes situated less than 15 feet apart are at high risk, and that wind-blown embers caused the most damage to homes during this wildfire. Only 2% of the houses burned, if built to the 2004 building code, and 13% burned if built before 2004 in San Diego. Get this report, “Megafires: The case for mitigation,” from the Institute for Business & Home Safety, at http://www.disastersafety.org/resource/resmgr/pdfs/wf_research.pdf .

After the Grass Valley Fire of 2007 (near Big Bear, CA, mostly pine, black oak, and manzanita shrubs), the damage assessment revealed that there was green or unburned vegetation around most of the destroyed homes. Of the 192 houses burned, 120 houses burned in an “urban fire” (house to house), 66 from embers or surface fires that burned right up to the house, and only 6 from burning trees (crown fire). Get this report at http://www.fs.fed.us/r5/sanbernardino/documents/grassvalley_structure_re....

Wildfire property losses have proven to be far lower when homeowners take responsibility—to build, retrofit, and maintain houses to current building codes for structures in fire-prone areas, There are now many lists of what homeowners can do, to reduces risks for themselves and their neighbors, often at low or no cost. Start by cleaning out gutters, pruning landscaping, and putting combustible “stuff” in the trash. Invest a little each year in retrofitting vents, windows, garage door seals, fences, and decks. Start a conversation with local elected officials about code enforcement, point-of-sale retrofits, and insurance discounts for retrofits and maintenance.

Get the best local information from the website www.wildfirezone.org and from the Burn Institute brochure, “Living with Wildfire,” posted at http://www.burninstitute.org/pdfs/BI-Wildfire-Guide09.pdf. Get information on building products, from the current approved Wildland Urban Interface Products list, posted at http://osfm.fire.ca.gov/strucfireengineer/pdf/bml/wuiproducts.pdf.