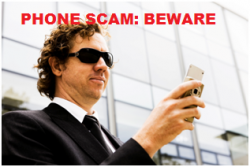 November 18, 2013 (San Diego ) – East County Magazine photographer Tom Abbott has informed ECM that he received an automated phone call this morning urging him to exercise his right to vote – on November 20, one day AFTER the San Diego mayoral election.

Abbott said he tried to dial *69 to redial the number and learn where it came from, but before he could do so, another call came in.

There is no evidence--yet--to reveal which candidate or independent expenditure group is behind the deceptive (and illegal) call.  Both Abbott and his wife are registered independents, so the motive apparently isn't partisan. But one is a union member and other is a naturalized citizen of Latino descent, raising the possibility that union members or minorities could be targets of an organized effort to suppress the vote.

Democrats David Alvarez and Nathan Fletcher both have strong union backing; Faulconer does not.  Alvarez is also of Latino heritage and counting on a large Latino turnout.

If you have received a similar deceptive call, please contact editor@eastcountymagazine.org  and if possible, get a recording of the call or document what number the call originated from.

Other deceptive messaging in the campaign has originated from Lincoln Club, which sent mailers bashing Democrat Nathan Fletcher for votes to end welfare and depicting a photo with Karl Rove, former Republican strategist for President George W. Bush.  The mailers failed to mention, however, that the Lincoln Club is a conservative pro-business group that has endorsed Republican Kevin Faulconer.