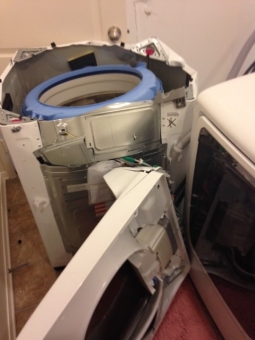 October 2, 2016 (Washington D.C.) –The U.S. Consumer Product Safety Commission has issued a warning about Samsung top-loading washing machines made between March 2011 and April 2016.  Some have exploded and others jolted violently, smashing holes into walls and hurling out chunks of metal and plastic, ABC news reports.

A class-action lawsuit against Samsung over the appliances is in the works. Samsung, still reeling from a recall of exploding smart phones, has thus far refused to recall the faulty washers despite numbers complaints to federal regulators.

The company has set up a set up a website for customers to check if their machines are faulty but has not released a list of defective models.

One report described the sound of an exploding Samsung washing machine as like “a bomb going off.” Others had damage to their homes. There is also potential for significant injury.

The CPSC is urging consumers to report any incidents to SaferProducts.gov.

Consumer Reports has revoked its endorsement of some Samsung washers as a result of the complaints.

That blew out and walked itself across the floor about 8 or 10 years ago.  It was a major fight to get money back or a replacement. That was a while back so I don't remember the brand; it was one of the very first computerized low-water washers.

I really prefer  non-computerized appliances. The old ones worked just fine, were much cheaper and way more reliable -- simple systems worked best, with far less that could go wrong,  and repairs were usually not costly.

It hard to believe that such a respectable company as Samsung would let something like that slip through their safety measures. It is even hard for me to say if I am more shocked, surprised or angry. I have recently bought their washing machine to my mother and now I am deeply concerned. First thing I am going to do right after work is to go and check it. It is great that the company started a website to check if your equipment is faulty or not but it would also be nice to get a list of potentialy dangerous