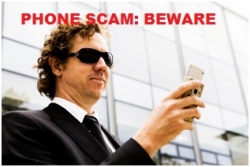 January 16, 2013 (San Diego) – The San Diego Sheriff is warning the public to beware of phone scammers posing as members of the Sheriff’s Department.  There are at least two separate scams.  One involves canceling arrest warrants or court appearances for a fee.  The other scam entails notifying the victim that they have won a prize, then asking for payment for taxes.  Scroll down for details.

In the first scam, the victims are told they have outstanding warrants.  Callers claim they will clear the arrest warrant or cancel a pending court appearance if the potential victim sends money within a certain time-frame.  Victims are also told the Sheriff’s Department will have a local police officer come to their home and arrest them if they don’t send money.  If you receive a solicitation for money based on this scenario, it’s a scam.

On Wednesday, January 10, a caller claiming to be a Sergeant from the Sheriff’s Financial Crimes Unit informed a 69-year-old woman from Fashion Valley that she won $600,000, but she would have to send a check in order to pay the taxes on the prize.  The woman in this case called the Sheriff’s Department and discovered the call was bogus.  Impersonating a Sheriff’s Deputy is a violation of state law.  No deputy or employee of the Sheriff’s Department will ever contact members of the public by telephone to demand money or any other form of payment.  If someone tells you they need money for you to receive money, it’s a scam.  If you get this type of call, hang up immediately.

People with outstanding warrants are encouraged to turn themselves in Monday through Friday from 8:00 a.m. to 5:00 p.m. at any one of the Sheriff’s Court Facilities. http://www.sdsheriff.net/csb_courtlocations.html For information on warrants and bail notices, visit http://apps.sdsheriff.net/warrant/waar.aspx.