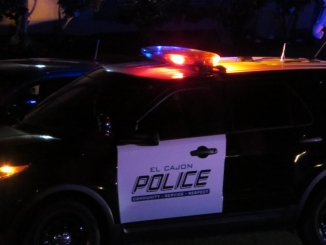 By Miriam Raftery
March 23, 2019 (El Cajon) – A bicyclist in her 40s who was struck by a sport utility vehicle at Fletcher Parkway and Cuyamaca Street in El Cajon is in a trauma center tonight with serious injuries.
Officers from the El Cajon Police department and Heartland Fire Department paramedics responded to calls reporting the collision at 6:25 p.m. They found the victim unresponsive in the street with major injuries. She was transported to a trauma center.

“After a preliminary investigation of the scene and the taking of witness statements, it appears the bicyclist was riding in a southerly direction in the crosswalk of Cuyamaca Street, against a red light,” says Lieutenant Jason Taub with El Cajon Police.

The bicyclist was struck by a 2017 Chevy SUV traveling westbound on Fletcher Parkway. The SUV driver, a 53-year-old man from El Cajon, remained on scene and has been fully cooperative with the investigation, Lt. Taub says, adding, that drugs or alcohol do not appear to be factors in the collision at this time.
The El Cajon Police Department is asking anyone with information regarding this collision to call (619) 579-3311.
“We would also like to remind those who ride bicycles on the roadway to obey all traffic control devices, only cross the street at designated, controlled intersections, and wear bright or light colored clothing for visibility,” Lt. Taub states. The El Cajon Police Department also recommends the use of a safety helmet for all bicycle riders.

I really think a lot of people believe I'M A PEDESTRIAN I HAVE RIGHT OF WAY! This is not true... You still have to follow the laws, just because there is a cross walk also doesn't mean you automatically have right of way. Runners on the island do this crap all the time. Running down the sidewalk, don't break their stride at all, then just sprint out into a crosswalk, that is illegal. You have to show the intent that you are wanting to cross so cars can yield, you just running out or riding your bike through does not give you right of way. Adults/Kids on bikes do the same thing, traveling down the bike lane, get to the intersection they don't hesitate/slow and just go right on through the cross walk. Infuriates me to no end, that and people who cross mid street when there is a legit cross walk 15yrds down..... VC 21950 (b), pedestrians may not run in front of approaching vehicles so as to cause a hazard.
Yet not surprising. I see this type of behavior nearly every day. Young kids and older adults, darting into traffic while riding scooters or bicycles, jaywalking, riding bicycles on the sidewalks, etc. Far too many people seem to be either ignorant of the laws, or perhaps just defiant. All the while putting their lives in danger. I do hope this woman survives and heals well.