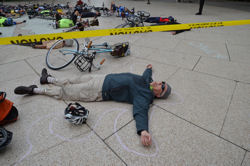 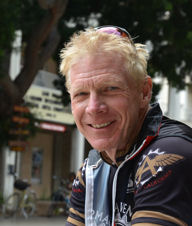 According to Jerry Logan, a native San Diegan, the riders came to try to raise consciousness and to demand safer streets. They listened to a few speeches and then fell on the ground to represent injuries or deaths. They also surrounded the group of bike riders with caution tape, as to indicate a crime or accident scene.

Mr. Gilbreth is the third bike rider to die since April 14 in Southern California, according to Bike San Diego. The tragedy also highlights the fact that the city has not done much to improve the infrastructure, as this is the same stretch of road where Tom Fudge of KPBS was hit five years ago, protesters point out. This highlights the little effort the city has made in order to improve conditions for bike riders.