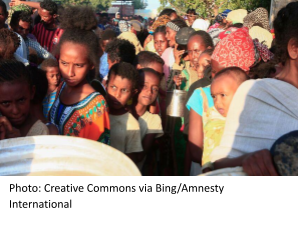 By Miriam Raftery
April 12, 2021 (Washington D.C.) – President Joe Biden announced plans on his first day in office to expand the number of refugees eligible for resettlement in the U.S. and rebuild refugee programs decimated under the Trump administration. He announced plans to raise the annual refugee cap from Trump’s 15,000, the lowest on record. But so far, Biden has not signed a presidential determination for that order to take effect.
On Monday, over 260 refugee leaders and former refugees sent a letter to Biden urging him to immediately sign the determination to allow the cap to rise, noting that over 700 scheduled flights have been cancelled for refugees who qualified for admission under the Trump rules.
The letter states in part, “Despite the success and historic bipartisan support of the resettlement program, the past four years of anti-refugee policy have had a devastating impact on the program. Record-low refugee arrivals this year have prolonged family separation…Every day that passes without a revised Presidential Determination leaves hundreds of refugee families in limbo in refugee camps and many waiting to be reunited with their loved ones here in the U.S. waiting for us to uphold our promise to protect. At a time of record displacement with more than 26 million refugees worldwide, our commitment to refugee resettlement must increase, not decrease.
We encourage you to continue to uphold the values inscribed at the base of the Statue of Liberty and return refugee resettlement to its honored place in our nation’s history. We urge you to show your leadership by signing a newly revised FY21 refugee admission goal of 62,500.”
Nine resettlement agencies also urged Biden on Friday to approve the higher cap, CNN reports.  As of March 31, only 2,050 refugees had been admitted into the U.S. this fiscal year (which began in October under Trump), the Refugee Processing Center reports. The low figure is due in part to Trump’s restrictions that blocked some categories of refugees from coming to America and severely limited others.
CNN reports that White House press secretary Jen Psaki said Biden remains committed to raising the cap.  Ned Price, a State Department spokesman, told CNN the delay is because the U.S. refugee program was “let in disarray by the past administration. There is a great deal of rebuilding that needs to take place in order to have a refugee program that allows us to achieve what we want to achieve in a way that is both effective and safe.”
According to the International Rescue Committee (IRC), thousands of would-be refugees remain in harm’s way. These include:
The IRC reports that over 30,000 refugees who passed U.S. background checks and security reviews remain banned under the Trump-era rules. Founded in 1933 at the call of Albert Einstein, the nonprofit organization works in over 40 nations to help people in humanitarian crises.
Nazanin Ash, the IRC’s vice president of policy and advocacy, says, “With Trump administration policies still in effect, President Biden is on track to admit the lowest number of refugees of any president to take office since the creation of the modern-day refugee resettlement program in 1980…The current restrictive and discriminatory categories amount to a near-total ban on Muslim refugees and most refugees from Africa, Asia, and the Middle East.”
She notes that the refugee admissions program has a “proud bipartisan history and a legacy of success in the U.S.  The American pubic believes, by wide margins, that the U.S. should be a place of refuge for those seeking safety from violence and persecution.”
Biden’s budget for fiscal year 2022 does show promise of fulfilling his state goal to help refugees. The proposed budget, which needs Congressional approval, includes $4.3 billion for the Office of Refugee Resettlement and $345 million for U.S. Citizenship and immigration to support an increased refugee cap, along with $10 billion in humanitarian assistance to support vulnerable populations in other countries.
The letter signed by former refugees makes the case for taking action soon.
“We write to you today not only as people who were once forced to flee our countries of origin, but also as proud Americans. Former refugees are this nation’s business owners, workers, faith leaders, teachers, elected officials, and valued members of our local communities. We have also been frontline workers during COVID-19, with 176,000 of us work in the healthcare field and 175,000 working as part of the food supply chain,” the letter states.
The U.S. Refugee Resettlement Program has resettled more than three million refugees since 1975 who have “successfully integrated into our nation’s fabric and contribute significantly to local communities and to the economy,” the letter continues.
It cites the example of a refugee named Aden, who spent 20 years in a refugee camp with his mother and siblings after losing their father and two siblings to militia groups. Today, the letter states, Aden, is a long-haul truck driver who worked through the Covid-19 pandemic.
“He was resettled to the U.S. in 2017 with a promise that his mother and siblings will immediately follow,” the refugees’ letter concludes. “Four year after they were approved for resettlement, they are still waiting.”