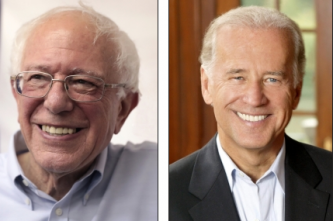 Biden and Sanders will also square off in a debate Sunday on CNN starting at 4 p.m. Pacific Standard Time. The debate was moved from Arizona to CNN's studio in Washington D.C. due to the coronavirus outbreak.  You can tune in via cable TV, as well as on the CNN website, the Univision website, and both networks’ mobile apps.

In response to President Trump's address to the nation Sunday on the cornavirus crisis, Biden said the virus "laid bare the shortcomings" of the Trump administration and faulted the President for putting travel restrictions based on "political favoritism and politics" over science to protect the public.  "Public health professional must be the ones making our public health decisions and communicating with the American people."  Biden called for making tests free and widely available, taking immediate action to assure enough hospital beds are available for coronavirus patients, speeding up vaccine development, and providing relief for working-class Americans hardest hit economically.

Sanders called for a response "on a scale of a major war," noting that casualties to U.S. civilians could be higher than to Americant troops during World War II.  He wants to see emergency unemployment help for those who have lost jobs, emergency homeless shelters, and a moratorium on evictions, foreclosures and utility shut offs for those hurt economically by the health crisis. He also reiterated his support of Medicare for All to provide Americans with "healthcare they need at no cost."