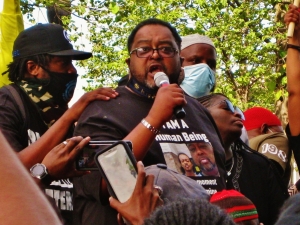 By Miriam Raftery
All photos by Les Brown
Photo (left): Jacob Blake Sr., August 29
September 3, 2020 (Kenosha, WI) – Both President Donald Trump and former Vice President Joe Biden made visits this week to Kenosha, Wisconsin, where yet another controversial police shooting of a Black man and later, the shooting deaths of two protesters by an armed white teenager now facing first degree homicide, have fueled further civil unrest.
On August 23, 29-year-old Jacob Blake was shot seven times in the back by a police officer. The shooting, which occurred in front of Blake’s young children, has left him paralyzed. According to the police officers’ union, officers were called out due to a domestic violence dispute involving Blake, who resisted arrest and was shot at point-blank range as he pulled open the door to enter a vehicle. Although police have said they believed Blake had a knife in the vehicle, Blake’s family says he was unarmed. 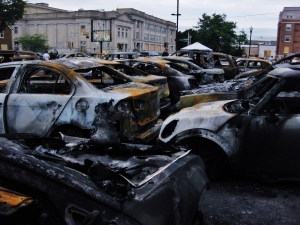 The shooting, caught on video that went viral, led to protests and riots, resulting in burning of cars (photo, right, September 1) and garbage trucks, as well as damage to multiple buildings. The County declared a state of emergency and the state sent in the National Guard.
Blake’s shooting prompted a new wave of nationwide protests including walk-outs by several major league sports teams, prompting cancellation of a Milwaukee Bucks playoff basketball game as well as games in Major League Baseball and Mayor League Soccer, as well as the Women’s National Basketball Association, National Hockey League, and National Football League over two days.
A citizens militia group called Kenosha Guard set up a Facebook page titled “Armed Citizens to Protect Our Lives and Property.” Kenosha’s Sheriff referred to the armed members as a “vigilante group” and said their presence made matters more confusing and was not helpful, however cellphone images showed some officers thanking the armed individuals and giving them water bottles.
On August 25, shortly before midnight, two protesters were killed and a third injured by a civilian armed with an AR-15 assault-style rifle.  Kyle Rittenhouse, 17, from Illinois has been charged with homicide. The Kenosha Guard has denied affiliation with Rittenhouse, who had voiced support for the pro-police “Blue Lives Matter” movement on social media.
Cell phone video showed Rittenhouse being chased and a shot was fired by an unknown person somewhere nearby.  Prosecutors contend that when a protester tried to take Rittenhouse’s gun, Rittenhouse fired four shots, then told someone on his cell phone, “I just killed somebody,” before fleeing the scene.  Another protester reportedly tried to stop Rittenhouse by striking him with a skateboard; Rittenhouse opened fire, striking the man in the chest and killing him.  A third person then pulled out a handgun and moved toward Rittenhouse, who fired and struck the third individual in the arm. 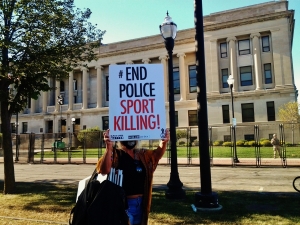 Photo (left): Kenosha Courthouse, August 29
Oddly, police arrived and did not immediately arrest Rittenhouse, who had his hands up and was still toting his semi-automatic rifle strapped across his chest.  He was arrested the next day in Illinois and charged with first degree homicide and recklessly endangering safety, as well as possession of a dangerous weapon by a person under age 18.
President Trump has refused to denounce either the shooting of Blake by police or the killing of protesters by Rittenhouse, whom critics have denounced as a vigilante or domestic terrorist, though others contend he acted in self defense.
In President Trump’s visit to Kenosha, where he surveyed the damage, he denounced rioting and looting. “Some people think those are two terrible words — law and order — and they’re not terrible at all, they’re beautiful,” Trump said. He did not address systemic racism but did promise federal aid to the city. Trump came to Kenosha despite a request from the city’s mayor to stay away.”
Democratic presidential nominee Joe Biden met for nearly an hour with Blake’s family and spoke by phone with Blake, who was just released from a hospital ICU after being shot seven times by Kenosha police. Speaking at a church, he promised to fight for “racial equality” and to work to address generations of inequality since slavery.
Earlier in the week, Biden also drew a clear distinction between protesters and rioters. “Regardless of how angry you are, if you loot or you burn, you ought to be held accountable. Period,” Biden said. “It just cannot be tolerated, across the board.” 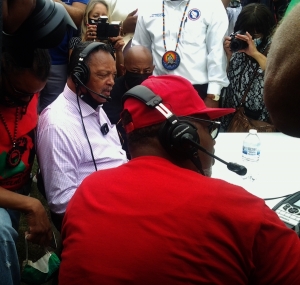 Photo: Rev. Jesse Jackson radio interview in Kenosha, September 1
Rev. Jesse Jackson also came to Kenosha to call for groups to not protest the president's visit but instead engage in "positive community service." But Rev. Jackson also denounced what he called “a system of racism in law enforcement,” adding, “There is a pattern of killing Black people.”
Jackson urged prosecution of all officers present who watched as Jacob was shot. “We demand justice,” the long-time civil rights leader said.