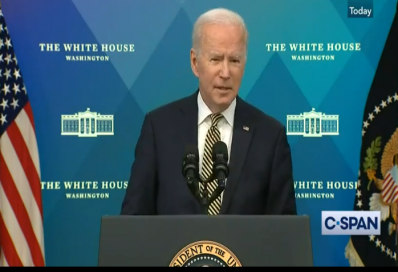 Zelensky sought a no-fly zone, which both the U.S. and NATO have declined due to fears that enforcement could result in shooting down Russian planes and sparking a broader conflict with Russia, a nuclear power. He invoked images of the Pearl Harbor and 9-11 attacks, also invoking Martin Luther King’s “I have a dream” speech as he made an impassioned plea to help Ukraine protect its independence.

His appeal included a graphic video of the devastation in Ukraine, which reportedly brought some in Congress to tears.

San Diego Congresswoman Sara Jacobs said shooting down Russian jets could trigger World War III. She opposes a no-fly zone, but made clear, “A no-fly zone is not the only way to `close the skies.’ The United States is working tireless to get Ukraine the defensive weapons –including S-300 anti-air systems – it needs to protect civilians form attacks.”

Jacobs noted that a no-fly zone would only work against weapons dropped from planes, not prevent attacks from missiles, artillery, and rockets which have been the majority of attacks from Russia in Ukraine.

She called Zelensky’s speech “heart-wrenching and inspiring,” adding that she supports working with allies to get Ukraine the weapons it needs as well as increasing humanitarian support, accepting more refugees, and imposing additional sanctions on Russia’s elite to apply pressure to end hostilities.

President Biden praised Ukrainian people for “courage and strength” that he said has inspired the world. He noted that sanctions are “crippling Putin’s economy” and said what’s at stake are values the U.S. and many other nations stand for.

“It’s about freedom, the right of people to determine their own future. It’s about making sure Ukraine never, will never be a victory for Putin,” Biden said.

In addition to numerous weapons that the U.S. has previously sent to the Ukraine, Biden’s administration on Saturday authorized another $200 million of weapons and ammunition for Ukraine. Today, he announced he has used his presidential authority to activate another $800 million in assistance, bringing the total to a billion dollars this week alone.

But the President warned, “I want to be honest with you. This could be a long and difficult battle. But the American people will be steadfast in our support to the people of Ukraine in the face of Putin’s immoral, unethical attacks on civilian populations.”

He also announced another $300 million in humanitarian aid for Ukrainians including refugees, then signed a bill authorizing the relief. President Biden closed by asking God to bless young Ukrainians defending their country.

Put assailed Biden’s remarks as “unacceptable and unforgiveable,” even though numerous videos clearly show bombings of civilian targets that appear to clearly be war crimes under international law.

A whopping 85% want to keep strict economic sanctions on Russia, including 88% of Democrats and 85% of Republicans. This includes a ban on Russian oil and gas, which Americans overwhelmingly support despite it fueling rising gas prices.

Over three-fourths  (77%) of those surveyed support keeping large numbers of U.S. forces in NATO countries near Ukraine, including 81% of Democrats and 75% of Republicans.

As for admitting thousands of Ukrainian refugees into the U.S., 69% support this including 80% of Democrats and 57% of Republicans.

putin stops this soon or I am afraid he will launch nuclear bombs to our area and life as we know it will be gone!