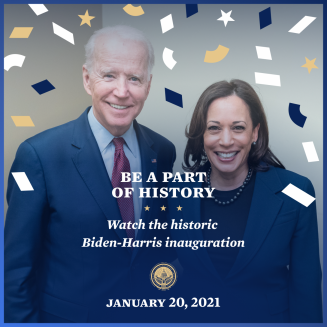 Due to threats of violence and the COVID-19 pandemic, the number of guests will be limited to mainly members of Congress and guests. The Capitol mall is closed to the public for security reasons. The event will be live streamed by the Presidential Inaugural Committee.  You can also watch the inauguration on C-span, CNN and other major networks. Throughout the day and evening, a variety of inaugural events will be held that the public can watch or paticipate in virtually.

The official ceremony will begin with the national anthem and invocation prayer at 11:30 a.m. Eastern time (8:30 a.m. Pacific time. Harris will be sworn in by Supreme Court Justice Sonia Sotomayor shortly before 12 noon EST, followed by Biden, who will be sworn in at noon by Chief Justice John Roberts.

President Biden will then deliver his inaugural address, in which he is expected to outline his goals to defeat the pandemic, that has killed nearly 400,000 Americans, rebuild, unify and heal the nation. He has already announced plans to introduce a new stimulus plan that will expand unemployment benefits, bring aid to small businesses, and provide a $1,400 per person stimulus which along with $600 already enacted will provide a total of $2,000 for most Americans.

After his speech, Biden will participate in the traditional Pass in Review, but the inaugural parade has been cancelled – replaced by a virtual “Parade Across America” set to feature "diverse, dynamic performances in communities across the country" and will pay "homage to America's heroes on the front lines of the pandemic” according to the Biden transition team.

Donald Trump, who was impeached a second time for inciting the capitol insurrection, will not attend the inauguration, though his Vice President, Mike Pence, does plan to be present. Trump plans to fly to his home in Florida Wednesday morning without fanfare.

President Biden, Vice President Harris and former Presidents Barack Obama, George W. Bush and Bill Clinton, along with their spouses, will later lay a wreath at the Tomb of the Unknow Soldier at Arlington National Cemetery. A military escort will then accompany the Bidens to the White House for an evening of virtual activities.

The inaugural ball has been cancelled. Instead, a 90-minute TV special hosted by movie star Tom Hanks titled “Celebrating America” at 8:30 p.m. Eastern time (5:30 Pacific Time) will feature musical performances by major stars such as Jennifer Lopez and Garth Brooks.  Lady Gaga will sing the national anthem. Biden and Harris will also speak during the evening virtual broadcast.

There are also pre-inaugural events planned including today in honor of Martin Luther King, Jr.’s birthday and events Wednesday morning for youths and other groups.