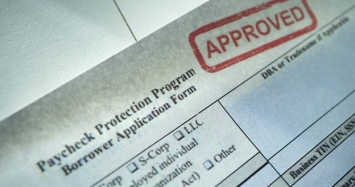 Starting today and for the next 14 days, only businesses with less than 20 employees can apply for Paycheck Protection Program (PPP) loans, which don’t have to be repaid provided 60% of the loan is spent on payroll and the rest on other qualified expenses. This opportunity will cover 98% of all small businesses in America.

The White House is also revamping guidelines to make more business owners eligible, including those with student loan debts and business owners who are legal residents but not citizens.

Small businesses account for 44 percent of the U.S. gross domestic product, according to the Small Business Administration (SBA), and these small businesses employee nearly half of all U.S. workers. Yet many were left out of earlier rounds of PPP loans under the Trump administration due to daunting and complex requirements.

The White House also announced a plan to help sole proprietors, independent contractors and self-employed individuals to get more federal aid.  These businesses, such as home repair contractors, beauticians and small independent retail shops, account for the majority of small businesses – and 70 percent are owned by women and people of color. Yet many are structurally excluded from the PPP or were approved for as little as $1 because of how PPP loans are calculated.

To address this problem, the Biden-Harris administration announced it will revise the loan calculation formula for these applicants and establish a $1 billion set aside for businesses without employees located in low- and moderate-income (LMI) areas.

Additional changes include allowing business owners to apply even if they have fallen behind on federal student loan payments as well as if they are legal residents but not citizens. Non-citizen residents including green card or visa holders can apply using Individual Taxpayer Identification numbers. The Biden-Harris team is also backing legislation that would allow small business owners with felony records to apply, as long as they are out of prison.

The White House also announced plans to cut waste, fraud and abuse. Biden’s team has added a new requirement for PPP loan guaranty approvals, which will now be contingent on passing an SBA fraud check, a check of the Treasury Department’s  Do Not Pay database and other public records.  In addition, the SBA is now conducting reviews of the largest loans and a random sampling of others.

Since Biden took office January 20, the latest round of PPP funds that opened a month ago has:

President Biden has spoken with several small businesses owners in recent weeks to understand their concerns about relief programs, according to the White House. In addition, Vice President Kamala Harris spoke last week with CEOs of major banks to highlight the the Administration’s focus on PPP lending to underserved small businesses. In recent weeks, the Vice President has also met virtually with small business owners and Black Chambers of Commerce to discuss challenges that small businesses face right now, and how passing the American Rescue Plan will provide critical relief during a difficult period.