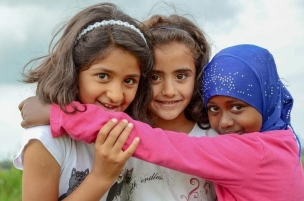 May 9, 2021 (San Diego) – President Joe Biden announced Monday that the U.S. will raise the cap on refugee admissions to 62,500 for this fiscal year – up from a historic low of 15,000 under the Trump administration “which did not reflect America’s values as a nation that welcomes and supports refugees,” President Biden said.

He also announced his intent to double that to 125,000 refugee admissions for fiscal year 2022.

There are approximately 80 million displaced men, women and children worldwide who are in immediate danger, fleeing war, persecution and other perils, according to Jewish Family Services of San Diego, which was founded 103 years ago to help welcome refugees in our region.

The announcement to lift the cap on refugees comes after Biden drew criticism from prominent Democrats and refugee advocates last month, when he stalled on signing an emergency declaration to raise the cap over concerns that it would take time to rebuild systems dismantled under the Trump administration.  The hesitation also came amid heat from Republicans over the influx of migrants at the U.S.-Mexico border.

It’s a myth, however, that this will result in a massive flood of Central and South American migrants pouring in. Besides lifting the cap, the executive order breaks admissions down into regional allocations. That includes 22,000 slots for African refugees, 13,000 for Near East and South Asia,  6,000 for East Asia, 4,000 for Europe, , only 5,000 for Latin America and the Caribbean, plus a reserve of 12,500 not specifically allocated geographically.

San Diego has long been a major hub for refugees, dating back to the post-Vietnam War era. In some recent years, San Diego has accepted the most refugees from around the world of any city in the U.S. including refugees from Africa, Asia, the Middle East, South and Central America.

Jewish Family Services of San Diego’s Chief Executive Officer Michael Hopkins applauded Biden’s announcement, stating, “We look forward to helping individuals and families from around the world rebuild their lives in San Diego in safety and with dignity.”

He adds, “Refugees and immigrants strengthen our social fabric and make San Diego—and our country—more prosperous and resilient in a changing world.”

The organization is asking for private philanthropy to supplement government funding to boost staffing and help provide longer-term services for resettled refugees with permanent homes in San Diego. To donate, visit www.jfssd.org/givetoday.  You can also sign up to volunteer at www.jfssd.org/helpnow.

Such supplemental aid is needed, since even President Biden acknowledges that achieving 62,500 refugee admissions is a goal, but likely will not be met this year. “We are working quickly to undo the damage of the last four years. It will take some time, but that work is already underway,” said Biden. “We might not make it the first year, but we are going to use every tool available to help these fully-vetted refugees fleeing horrific conditions in their home countries.”

David Miliband, president and CEO of the International Rescue Committee, another major organization aiding refugees including here in San Diego, also welcomed Biden’s announcement.  “When America welcomes refugees it is the best of America, leaning on its distinguished tradition and long-held values of providing refuge to those fleeing violence and political persecution,” he said, CNN reports.

Congresswoman Sara Jacobs (D-San Diego) also praised the decision to raise the cap. “We have a moral obligation to provide safety and security to refugees fleeing violence and humanitarian crises,” she said in a statement to the media.  “I’m glad that the President lifted the unthinkably low cap set by the previous administration and look forward to working together to reach 125,000 refugee admissions next year.”