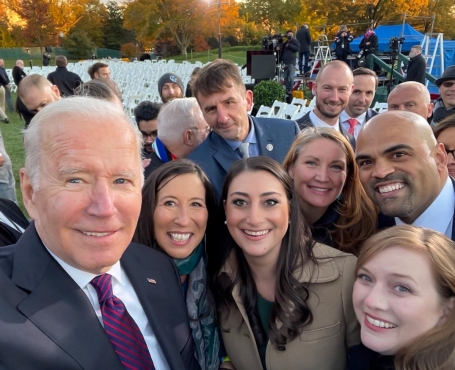 November 19, 2021(San Diego’s East County) –  Could funds from the Infrastructure Investment and Jobs Act just signed into law by President Joe Biden be used to fund sorely needed projects to benefit East County, from wildfire prevention to reducing freeway gridlock, taking communities off-grid, and improving dam safety?  East County Magazine reached out to Congresswoman Sara Jacobs, who attended the bill signing at the White House. She issued a statement on some local priorities and had her staff respond on other potential projects including:

“We have big infrastructure needs in San Diego, from broadband to transportation to wildfire prevention, but the good news is that this bill provides new funding to meet these needs. Now it’s time to make sure that San Diego gets our share of the funding and I look forward to working with our state and local partners to get that done,” Jacob says.

The historic measure will “create good jobs, connect our communities, strengthen our energy grid, and help us combat climate change,” she adds.

The bill includes over $44 billion in formula funding for California, with much more funding also available through grant programs.  This White House fact sheet details formula funds for our state. Under the formula funding alone, over the next five years California is expected to receive:

According to the House Transportation and Infrastructure Committee (link here, click the fourth table), the San Diego metro area will be eligible for $849 million in Highway Trust Fund and General Fund funding over the next five years. These are two of the primary funds for roads and transit. The other parts of the bill will come out of different revenue streams.

What about East County specific projects?

Will McDonald, Communications Director for Congresswoman Sara Jacobs, provided these written responses to our inquiries on specific types of local projects:

Q: Could any of this go toward transit and rail projects that SANDAG wants and maybe avoid the mileage tax SANDAG wants everyone to pay?

A: Many of the projects SANDAG are working on would be eligible for funding under the bill and Hasan Ikhrata, Executive Director, spoke about the impact the legislation has on SANDAG’s priorities with KBPS this week.  Specific questions should be directed towards them however.

Q: What about widening the gridlocked highway 52 in Santee?

A: Congresswoman Jacobs knows that congestion on Highway 52 has long been a concern in East County. Any specific programs and projects would need to first be authorized and planned by state and local governments, but a highway widening project like this would likely be eligible to apply for federal funding under the legislation.

Q: How about cleaning up the toxic issues near Gillespie Field and an elementary school where a toxic underground plume has been a concern?

A: The toxic plume in El Cajon and the potential for contaminated air and water is very concerning. The legislation includes very significant funding for both environmental cleanup and clean water projects and our office would look forward to meeting with local officials to discuss securing federal support.

Q: Do we have any lead pipes in our region that might get replaced?

A: Nationwide lead pipes are widespread and in use in every state and there are still tens of thousands of lead pipes in use in California and there has been increased concern about their prevalence in San Diego County in recent years. The Infrastructure Investment and Jobs Act provides $15 billion in funding to replace lead pipes and is an historic opportunity to make sure every school and home in the US is free from lead pipes.

Q: How about taking some backcountry communities suffering so many preemptive power outages off grid with solar to power an entire town like Descanso (which has had dozens of SDG&E-imposed outages whenever the wind blows) just as what Borrego Springs already has?

A: The Infrastructure Investment and Jobs Act includes over $60 billion dollars in funding to upgrade electrical grids to help ensure reliable power delivery.

Q: One other VERY big infrastructure issue here is the decaying and alarming condition of the old earthen dam at El Capitan reservoir in Lakeside; it’s received a dangerously low safety rating from the state and models have shown if it broke it could flood all the way down to Mission Valley and the site of the new SDSU campus buildings, killing potentially thousands of people. Even more disturbing is that there’s a major quake fault, a branch off the Elsinore fault forecast to have over a 7.0 quake within the next 50 years, that could spell disaster.  Is there money in this bill to shore up failing dams?

A: Yes, there is funding in the bill for dam maintenance and repair.

Jacobs, at a press conference last week, indicated that decisions on which local projects to fund will be guided by recommendations from state and local officials.  Supervisor Joel Anderson, when asked about the dam situation, indicated Mayor Todd Gloria and the City of San Diego would need to take the lead in requesting such funds but that he could write a letter in support.

The Infrastructure Investment and Jobs Act is partially financed by redirecting unspent emergency relief funds, corporate user fees, Superfund fees, strengthened tax enforcement around cryptocurrencies and other measures. McDonald adds, “It is likely that when the Congressional Budget Office report on the Build Back Better Act comes out later this month that the two bills together will be deficit neutral.”

Congresswoman Jacobs says she was “honored to represent San Diego” at the White House signing of the infrastructure bill.

In a statement to East County Magazine, she said, “The Infrastructure Investment and Jobs Act will create jobs, make our economy more competitive, improve our quality of life, and help us combat climate change. Infrastructure investment has been a bipartisan priority for a long time and I was proud to work with my colleagues in Congress and with President Biden to get this bill passed.”

San Diego’s four Democratic representatives voted in favor of the bill, but Republican Darrell Issa voted against it.  Thirteen Republicans who did vote for the measure in the House of Representatives have faced a backlash within their party and threats of primary challengers.

Going forward, Jacobs says, “The next step will be for our local, state, and federal officials to work together to make sure that East County receives the funding it needs.”