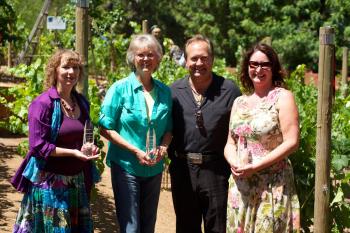 “”We have recently broken ground and designed the new [St. Madeleine’s] Mad Hatter Vineyard,” Maness told the crowd, then promptly asked for supporters to adopt  rows of grapevines. 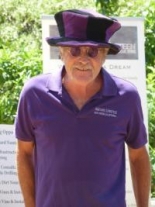 In addition to benefiting the charity that helps developmentally disabled adults, Maness noted while vineyard manager John Kiley sported a Mad Hatter’s top hat (photo, left). “This dynamic new vineyard partnership will empower and train new generations of growers and if we build it, they will come to learn.”

Supervisor Jacob was honored as a Trail Blazer for “cutting through red tape” and “pioneering the boutique winery ordinance helping rural small vineyard owners and wine growers get started working no their dreams,” Maness said.  The ordinance has made it easier for small vintners to open tasting rooms – an action that has contributed to more than 70 wineries now operating in San Diego County. 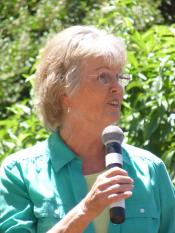 Jacob (photo, right)described her vision for “agritourism” to boost East County’s economy . She said she hopes to enact similar legislation to make it easier for local farmers to produce cheeses and is currently working on an equine ordinance to benefit owners of small stables.  The wine industry locally creates both direct and indirect jobs including growing and harvesting grapes, fermenting and bottling the wine, and transport the finished products to stores and restaurants. 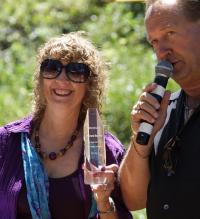 Maness honored Kerns as a “strong energized, visionary woman” who is an educator, promoter and publisher as well as a wine maker .   He called ECM editor Miriam Raftery (photo, left) “one of the hardest working women I know” and cited appreciation of both editors’ coverage of the local winemaking industry in their publications.  Maness will be the host of the Vines and Wines segment on the East County Magazine Radio Show launching in July.

Guests at the event sampled wines from local vintners, stomped grapes (photo, right), bid on auction items, vied for prizes in an 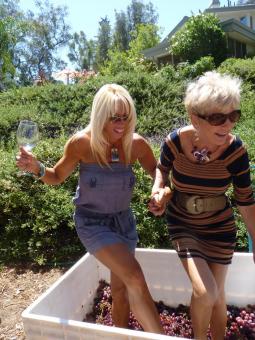 opportunity drawing, and enjoyed live music all in a beautiful setting at the Manor Vineyard owned by Stephanie Young (photo, lower left).

“All of us here today are involved in one way or another as we continue to create a brighters future for San Diegans,” said Maness, who noted that college-level vineyard education classe are now popping up locally at Cuyamaca College and the University of San Marcos. 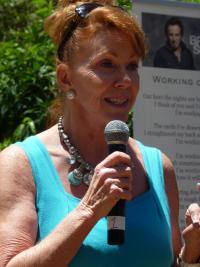 Maness, a vineyard consultant, also praised the merits of living a “vineyard lifestyle” that “returns family time to its priority” and “brings us back to the real world of simplicity of giving back to the land, getting our hands dirty, growing our own grapes and wines and being proud of what you do with your spare time.”

To the many attendees who own vineyards or wineries, Maness advised, “Keep working on your dreams. Cheers.”