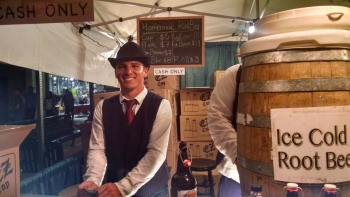 October 1, 2016 (La Mesa)-- Crowds thronged the streets of  La Mesa last night for the opening of Oktoberfest , savoring an array of international foods,  Bavarian beer, root beer, arts and crafts vendors, and dancing the night away in the beer garden to the strains of a German band. 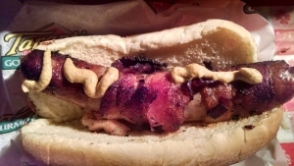 The organizers lived up to their promise to make this year's event less commercial with more arts and crafts booths -- not a realtor or cruise ship company that we could find.Other than some autos displayed by Bob Stall Chevrolet,  the 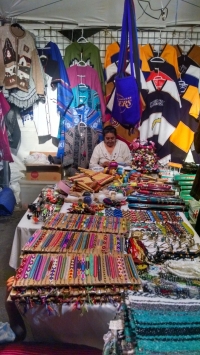 major sponsor,the vast majority of goods displayed are the types of items one might shop for as holiday gifts, personal splurges or household decor.

Police provided visible  security, also welcoming friendly greetings from many -- a welcome relief for some local officers after helping out in El Cajon the night before during tense protests over a police shooting there.  A concert in El Cajon downtown was cancelled Friday night and many businesses there shut down.  La Mesa may have benefitted from unfortunate events in El  Cajon, that may have enticed some to check out La Mesa's Oktoberfest instead of another Oktoberfest in El Cajon.

The City of  La Mesa took over operating this year's event,  after a merchant's group defaulting on paying back security costs for events the prior year.  The City hired Eventwerks to run the three-day festival that continues through Sunday. From the looks of the crowd size, as well as the large number and array of vendor booths,  it appears likely the event will prove a financial success--as well as serving up good times for attendees.

Next year, City Council members and the Mayor have said they hope to hand off running of the annual Oktoberfest to a new merchant's group that will debut its first event December 10th as a holiday celebration, so mark your calendars!