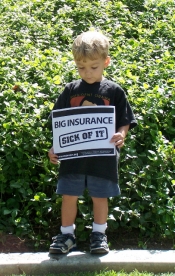 September 22, 2009 (La Jolla) Health reform advocates today held a “Big Insurance: Sick of It” rally as part of a nationwide day of action. Locally, a rally was staged in front of the San Diego office of Anthem Blue Cross, the California subsidiary of insurance giant Wellpoint. Protestors demanded that Anthem Blue Cross sign a pledge to support real reform and end what the activists called “bad health insurance industries practices.”

More than 75 exuberant protestors called for an immediate end to such practices as denying coverage based on pre-existing medical conditions, arbitrary caps on payments, and terminating policies (in many cases, after people are sick with a costly-to-treat illness). Advocates for reform also charged that Anthem offers incentives to its employees to deny patient care or reject claims.

The pledge includes a call for Anthem to stop using members’ funds to lobby against meaningful health reform proposals being considered in Congress. (Currently health insurance companies spend an estimated $641.000 dollars per day opposing health care reform, according to www.opensecrets.org). 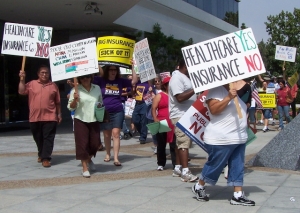 Organizers of the six actions statewide are members of California Health Care for America Now. They were joined in San Diego by other organizations including Health Access, MoveOn, the California Labor Federation and the Service Employees International Union. The California Health Care for America Now coalition claims to represent over 1100 organizations with 30 million people dedicated to winning quality, affordable health care that can be counted on.

Local Organizing Director Stephanie Monroe explained, “We’re sick of big insurance denying our care in order to maximize their profits.” She added, “The debate in Washington comes down to this: if the insurance companies win – we lose.” 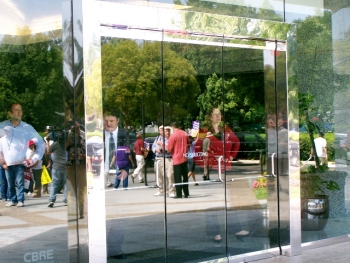 After a delegation of activist entered the offices to present their demands to the insurance company’s management, security and company officials denied further entrance and glared at the protestors from behind the glass doors.

Several attendees took the megaphone to tell their personal horror stories at the hands of the insurance companies. Alexa Kaplan said she hadn’t had a bad experience personally but feared for her son Nickolas. “Everyone should have health insurance” she said.

Marcia Bookstein carried a sign noting that the World Health Organization ranked the United States as 37th in the world – just ahead of Slovenia. 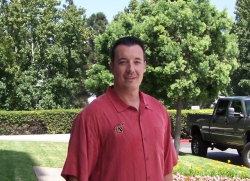 Bill Hammett, President of the San Diego Association of Health Underwriters (www.SDAHV,.org) came out to reason with the protestors. “I don’t want President Obama to fail – that’s not it at all,” he said. “The public option is a loser but health care has to be subsidized – we have to get this right.”

When asked what should be done, he cited three measures: “One, no denying coverage for pre-conditions but that has to be balanced by spreading the risk to a much larger pool of insured people. In other words there must be a mandate to cover everyone without denying for pre-conditions, but also a mandate that everyone has to buy insurance.” “Number two, tort reform and number three, electronic record keeping” he concluded.

Critics point to the spiraling cost of health insurance premiums and doubt that forcing people to buy insurance from private companies will solve the problem for those who can’t afford coverage.

But one protestor at the rally says he’s found a solution—thanks to a government-run healthcare program. 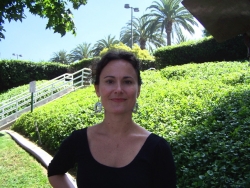 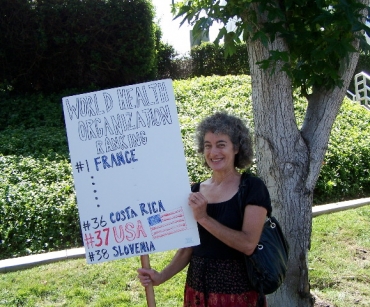 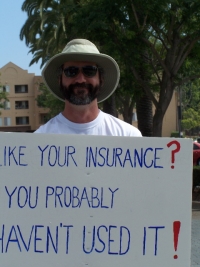