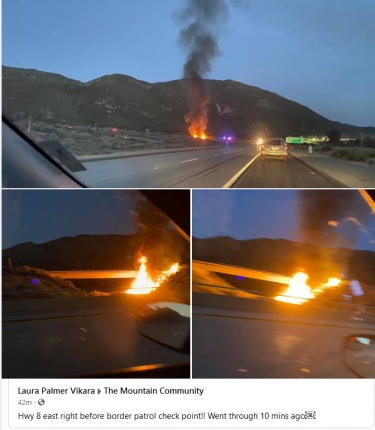 Photo via The Mountain Community on Facebook, posted by Laura Palmer Vikara

Update May 13, 2021 -- The California Highway Patrol reports that the  driver was trapped in the vehicle and died. The body of a second male victim as found later in the afternoon. Both of their identities are unknown. Around 7:48 p.m. the driver hauling a semi-trailer (big rig) lost control and struck the center divider, hit a bridge rail and rolled down an embankment off I-8 east of Sunrise Highway, where the truck became engulfed in flames. CHP, Border Patrol and Cal Fire arrived shortly after the crash. It is unknown what caused the accident and whether the victims wore seatbelts. CHP asks anyone who witnessed this crash to call the CHP in El Cajon at (619)401-2000.

May 12, 2021 (Pine Valley) – Westbound Interstate 8 is shutdown from Buckman Springs Road to Sunrise Highway due to a big rig truck that caught fire, crashed and damaged a bridge. Traffic is being diverted onto Old Highway 80.

According to the CHP Incidents page, the accident occurred near the Border Patrol Checkpoint, which is three miles east of Pine Valley.  Damage to 30 feet of metal and concrete on the bridge is reported.

There is no word yet on what caused the crash, the fate of the driver, or whether the fire has been contained.