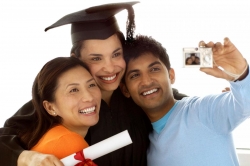 Assemblymember Marty Block (AD-78) applauded CSU’s decision and announced that AB 2402, legislation he proposed to address problems caused by the admissions policy change, has been signed by the Governor.

Block's bill shines a greater light on the process when CSU local campuses change their admissions policies and requires the CSU to follow specified public notice criteria prior to adopting a change in the admissions criteria that affects students in local service areas.

“Today is a victorious day for all 1,740 local students who played by the rules and worked hard in school to achieve their dreams of pursuing higher education. I applaud the California State University and San Diego State University for correcting an injustice – recognizing the value of these young minds and realizing why it is important to keep the door of higher education open in the backyards of nearly a thousand students, said Block. “These students will be able to jumpstart their college careers sooner than expected, which is good news for San Diego’s local economy and the region’s ability to create a strong, capable workforce ready to take on the jobs of tomorrow.”

Those students have been on a waiting list despite meeting all requirements for California State University admissions at the time of their applications.

Last year, SDSU implemented its admissions changes without notifying the surrounding community that would have been affected. Because students had planned their academic curriculum for the original admissions criteria, many students found that the eligibility requirements they worked for years to meet were were no longer adequate. The decision was made so late in the application cycle that lack of notification left countless students in a potential state of limbo, as they completed their requirements for guaranteed admission even though that “guarantee” had been eliminated. As a result, students residing within the local service area who had planned to attend SDSU found their only opportunity for college taken away.

Over the last year, Assemblymember Block has worked to address the flawed changes that were made in SDSU admissions policy causing 1,740 qualified, local students to be rejected. These efforts culminated in AB 2402, which has been signed into law by Governor Schwarzenegger.

“As a lifetime champion of expanding higher education opportunities, I am glad to see this legislation signed into law. AB 2402 is the result of a community coming together to prevent repeat situations like we witnessed at SDSU last year. With this legislation, we are increasing the transparency required when admissions policies are changed that impact local students to ensure students are no longer blindly disenfranchised by their local public university,” said  Block. “This means students will be better informed of eligibility requirements when preparing their college applications and better suited to develop a plan to successfully achieve their academic goals.”

AB 2402 requires a CSU campus to do all of the following prior to adopting a change in the criteria for admission that affects applicants in the Local Service Areas (LSAs) of a CSU campus, including changes to transfer requirements and determinations regarding impaction of majors:

The bill requires that in most cases students be given a full year warning before any changes occur. This allows students and their families to make any necessary adjustments to their college application process.