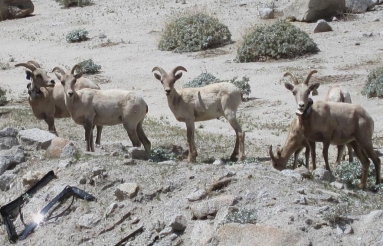 By Miriam Raftery
August 7, 2019 (Borrego Springs) – Braving scorching heat, 84 volunteers led by environmental scientist Mike Puzzo tallied 273 Desert Bighorn Sheep during the 49th annual count in the Anza-Borrego Desert July 4-7.
That’s an increase over the 225 sheep observed last year, though this year there were more volunteers were added, raising the number of sites visited from 16 to 20. Increased rainfall and vegetation may also have contributed to a healthy lamb to ewe ratio and a substantial number of lambs born early enough in the year to survive the summer heat.
The counters observed 110 ewes, 107 rams and 47 lambs.
Puzzo says, “It looks like herd numbers are stable,” the Borrego Sun reports. That’s important, since the species can be removed from the endangered species list and reclassified as threatened if the population remains stable or grows over a six-year period.  Desert Bighorn have a range that also includes parts of Mexico as well as the San Jacinto area in  Riverside County.
Next year will be the 50th anniversary of the annual sheep count organized by the Anza-Borrego Foundation with help from private donors. All counters must under training for not only how to identify sheep and assess their condition, but also survive intense heat in rugged terrain.
If you would like to help count sheep next year, contact AB.Sheepcount@parks.ca.gov.