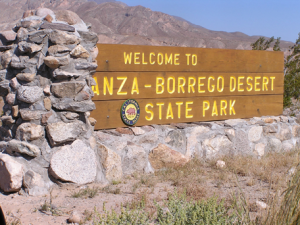 Update July 4: The California State Park Service has cancelled this year's sheep count due to the death and will be examining safety protocols.
By Miriam Raftery
Photo courtesy of Anza-Borrego Desert State Park
June 23, 2021 (Borrego Springs) Updated July 25 – A hike into Palm Canyon within Anza-Borrego Desert State Park to leave water in preparation for the annual desert bighorn sheep count turned deadly Saturday afternoon.  Medics were called to rescue a pair of hikers in distress around 12:40 p.m.
Cal Fire Captain Frank LoCoco told CBS 8, “One of those hikers succumbed to that heat illness and was declared deceased at the scene, and the other was transported to the hospital in critical condition.”  The hiker was identified by the Medical Examiner on June 25 at Donald White of Culver City. Fox 5 reports that he was a volunteer participating in the annual desert bighorn sheep count.
A firefighter from Borrego Springs also collapsed during the rescue operation, LoCoco said.
Temperatures on Saturday, June 19, hit 117 degrees in Borrego Springs with a low of 92 degrees. The National Weather Service had issued an extreme heat warning, advising people to avoid strenuous outdoor activity.
Cal Fire reports an increase in trail rescues during the recent heat wave, which prompted Cleveland National Forest to temporarily close trails to Cedar Creek Falls and Three Sisters Falls, two popular but steep trails where rescues are common and multiple deaths have occurred in the past.
The incident has prompted posts on social media suggesting that drones or trail cams be used to help count sheep in the future to avoid putting volunteers' health and lives at risk. ECM has emailed the organizer of this year's count, but did not receive a response.